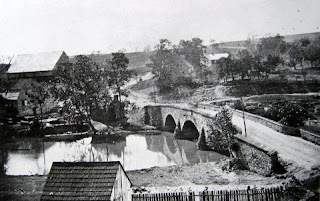 This photo of the Middle Bridge over Antietam Creek was taken by Alexander Gardner on Sept. 22, 1862, five days after the Battle of Antietam. The view is to the west. The road in the center is the Boonsboro Turnpike (today, SR 34). To the left (south) is the Newcomer Barn. The house on the right-hand side of the road is the Newcomer Farmhouse. Sharpsburg itself is just over the horizon in the center, which was crowned by Confederate batteries along its length. It is remarkable how barren the landscape appears. 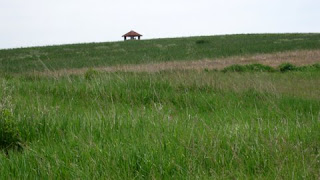 Above: The top of the observation tower on the Sunken Road-Bloody Lane viewed from the same place as the previous photo, on the Clipp-Roulette farm lane. The view is to the southeast. From this (and the previous photo), you can get a sense of how the Federal advance was actually masked by the high ground parallel to the Sunken Road. The Federals were under artillery fire, and as they topped the ridge line, were brought under heavy musketry fire by the defenders. 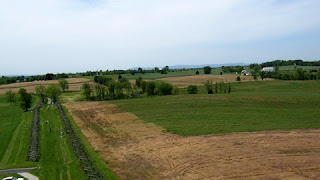 Above: View northwest from the observation tower on the Bloody Lane. The farm lane from which the previous two photos were taken is marked by the line of trees in the middle ground. The buildings of the Mumma Farm, burned during the battle, are in the distance.
Posted by Dur Ecu at 1:42 PM No comments: 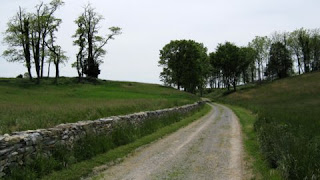 The approach to Bloody Lane from the north on the axis of advance of Brig. Gen. Nathan Kimball’s 1st Bde., 3d Div. (French), II Corps (Sumner). “Now boys, we are going, and we’ll stay with them all day if they want us to!” – General Kimball. What ensued was “systematic killing,” according to Sgt. Thomas Galwey of the 8th Ohio Inf.
Posted by Dur Ecu at 6:30 PM No comments: 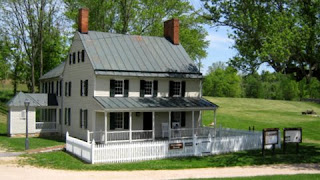 Above: The Newcomer Farmhouse. The trailhead is to the right of the house in this view. There is parking to the left. 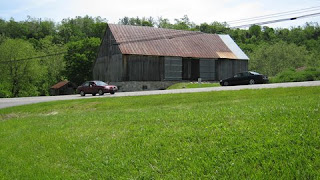 Above: The Newcomer Barn, across the Boonsboro Pike (Rte. 34) from the farmhouse. 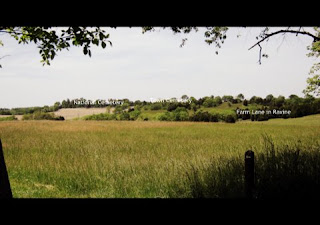 Above: Photo taken from the bend in the trail at the crest of the steep hill on which Tidball’s Battery, consisting of six 3-in. Ordnance RML, went into battery. The right-most section was probably in battery at this location. Tidball’s field of fire to the west is shown. Confederate guns crowned Cemetery Hill, the location of the National Cemetery and the Town Cemetery, neither of which were in existence on the day of battle. The turnpike bisected the hill. The farmroad running through a deep ravine northward toward Bloody Lane is indicated. 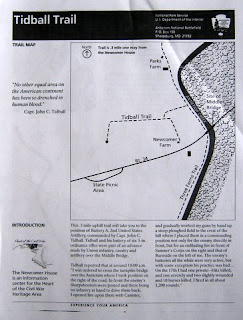 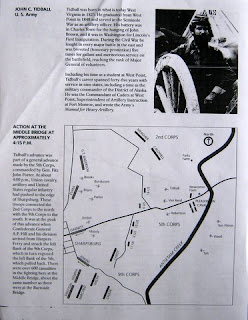 On Sat., May 12, we hiked the new Tidball Trail at Antietam National Battlefield, near Sharpsburg, Md. The handout for the trail (above – front and back) explains the significance of the site. The trailhead is at the beautifully restored Newcomer Farmhouse, which is just west of the modern bridge erected on the site of the Middle Bridge that existed at the time of the battle. This trail is an important resource for anyone seeking to gain an understanding of the fighting in the much-neglected and heretofore somewhat inaccessible Middle Bridge sector of the battlefield. I’ll be posting photos of the vistas available in future.
Posted by Dur Ecu at 7:56 PM No comments: 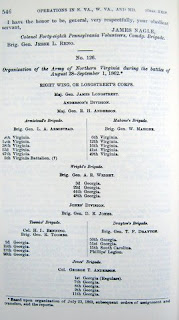 Above: Statement of the composition of Drayton’s Brigade in the order of battle of the Army of Northern Virginia for the Second Manassas Campaign. Source: US War Department. The War of the Rebellion: A Compilation of the Official Records of the Union and Confederate Armies. Ser. I, Vol. XII, Part 2, Ser. No. 16. Operations in Northern Virginia, West Virginia, and Maryland, March 17-September 2, 1862.  Washington, DC: USGPO, 1885.

Drayton’s Brigade had an ephemeral existence. It participated in the bookend Second Manassas and Maryland campaigns before being broken-up in November 1862. Its brief existence as a formation attached to the Army of Northern Virginia and the extraordinary casualties it incurred at South Mountain (Fox’s Gap), including the loss of many officers, resulted in a relatively sparse documentary record. This is indicated by statements of the brigade’s composition in the official records and in many, if not most, secondary works until recently. As illustrated above, the brigade appears to have consisted of four units – two regiments and one infantry battalion from Georgia and one regiment from South Carolina. This is how it is represented in the most detailed histories of the 19th century (e.g., Ezra A. Carman’s ms. History of the Antietam campaign, recently published) and the best recent works on the Second Manassas campaign and the Maryland campaign (e.g., Hennessy’s and Sears’, inter alia). In fact, the brigade consisted of five units, as shown below.

The (usually) missing unit is the 3d S.C. Inf. Bn., aka the James or Laurens Battalion. The fact of this unit’s attachment to the brigade I believe was uncovered by the research of local, unheralded historians studying the South Mountain battle and indeed the story of the 3d S.C. Bn. itself. 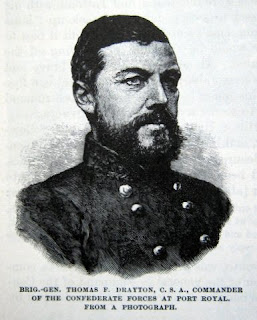 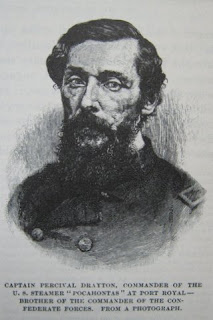 Much of my time lately has been taken up with research and analysis for a series of scenarios. The focus has been on various units and formations involved in the Second Manassas-Antietam campaign of 1862. As usual, my concerns have been strengths, casualties, characterization of leaders, and indices of combat effectiveness. I've returned to these questions time and again over the years. One of the formations that has intrigued me over time has been the brigade General Drayton, which, under the apparently feckless leadership of its commander (depicted above, with his brother, whom he faced in battle at Port Royal) was virtually destroyed in its sojourn of less than a month with the Army of Northern Virginia.


Brig. Gen. Thomas Fenwick Drayton (1808-1891) was a classmate of Confederate Pres. Jefferson Davis at West Point, and the two were friends. A South Carolinian, he had led Confederate land forces in the unsuccessful defense of Port Royal Sound (Nov. 7, 1861). His brother, Capt. Percival Drayton, commanded a gunboat in the attacking Union squadron. At the end of July 1862, Drayton’s Brigade, together with that of “Shanks” Evans, moved north from the Department of South Carolina and Georgia to reinforce Lee’s army in Virginia. In the Army of Northern Virginia, Drayton led his brigade at Second Manassas, South Mountain, and Antietam. The brigade found little employment in the Second Manassas campaign but was nearly wrecked at South Mountain. How much of this was Drayton’s fault is debatable. At Antietam, the remnants of the brigade resisted Burnside’s advance briefly before breaking for the rear. Documentation of Drayton’s command performance is scarce. It seems he was considered “inefficient” by superiors. In addition, he was criticized in press reports that originated among stringers in his brigade. Following the Antietam campaign, he was relieved, his brigade was broken-up, and he was shunted off to administrative duties and minor commands in backwater districts. In truth, he was probably better suited to desk work than field command.