Blakely Field Guns in the Army of Northern Virginia 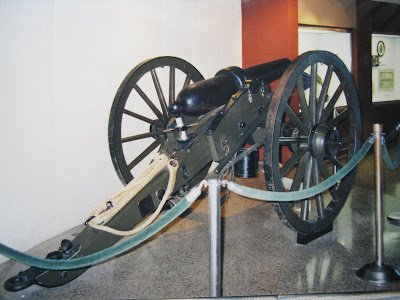 Above: Another view of the Blakely MLR that used to be on display at the Cyclorama Center at Gettysburg NMP.

The Blakely gun could be found in two batteries of the Stuart Horse Artillery, Army of Northern Virginia:

(1) Chew’s (Va.) Battery, known as the Ashby Artillery because of its early association with Turner Ashby’s famed “Laurel Brigade” of Stonewall Jackson’s Valley District. This unit was the first horse artillery battery in the ANV. It was organized on Nov. 11, 1861, with Roger Preston Chew of Charles Town, Va. (today, W. Va.) as captain. Chew had one Blakely among his guns through the great cavalry battle of Brandy Station, where it “ended its life.”

(2) Hart’s Washington (S.C.) Battery, commanded by Capt. James F. Hart, which was generally associated with Hampton’s Brigade. Hart had four Blakelys in the Maryland campaign (1862) and three at Gettysburg, having lost one to Union counterbattery fire in the Loudoun Valley fighting following Brandy Station.
Posted by Dur Ecu at 6:01 PM No comments: 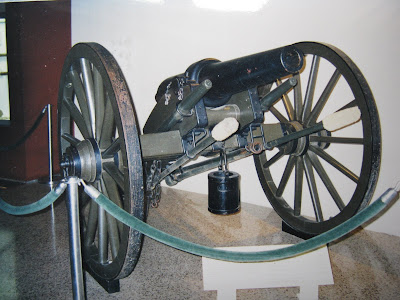 The 3.60-in. Blakely muzzle-loading rifle was practically an ideal gun for the horse artillery. Its light weight (the 58-in.-long iron tube weighed just 700 lbs.), handiness, accuracy, and reliability marked it as a superior piece. And, it had remarkable range — reaching 1,760 yds. with a 1.5-lb. powder charge at 7º30’ elevation. Blakelys could be found with Hart’s and Chew’s horse artillery batteries in the Army of Northern Virginia. The fine example shown was on display in the Cyclorama Building at Gettysburg National Military Park. It was cast by Fawcett, Preston & Co., Liverpool, England, in 1861.©
Posted by Dur Ecu at 2:37 PM No comments:

Indians in general were crafty, devious, unpredictable, and employed deception, guile, ambush and stratagem. They were also relatively well organized locally and organizationally coherent in tribal areas, which were sometimes quite extensive.

They were an important source of operational-tactical information for Europeans, whose knowledge of events in LF was limited generally to the areas they control.

In terms of SF Actions! Indian traits are:
canny
slippery
undisciplined, but betters (Indians were undisciplined but saw themselves as betters, so this is different.)
expert shooters

No Indian can possess any of the following characteristics:
disciplined
swordsman
coward
bookish

When not detected, Indians can perform any two actions per turn (except, obviously, no. 7 “mount...”). (I’m going to see how this works in practice, so it’s provisional for now.)

They are allowed only one turn of HTH, unless successful. If unsuccessful, they will immediately withdraw from contact, facing the enemy. (Again, I want to see how this works in practice.)

Caciques were Indian chiefs in the La Florida-Caribbean region.

Current Reading: In the Saddle with Stuart 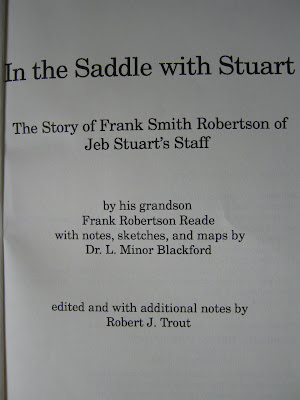 Lt. Francis (“Frank”) Smith Robertson (1841-1926) was a student at the University of Virginia when the Civil War broke out in 1861. The son of former Virginia governor Wyndham Robertson, he was a child of privilege who went to war initially as an infantry officer. Contracting an illness that plagued him for months and killed dozens of his fellows in the 48th Va., he eventually recovered and found employment as an engineer officer on Gen. Jeb Stuart’s staff. Although he had no qualifications for his position (a distinction he shared with at least one other), he nevertheless served bravely and efficiently from April 1863 until Stuart’s death. Afterwards, he served on the staff of Gen. W.H.F. (“Rooney”) Lee.

This is another book of wartime reminiscences well edited by Robert J. Trout. Much of it was written contemporaneously with the events described, with clarifications and additions penned later. I found it especially useful for its descriptions of Brandy Station, Gettysburg, and Five Forks. Robertson brings home also in a most affecting manner the cavalryman’s relationship with his mounts – from Miranda, who saved his life by her speed; to Bostona, who couldn’t be made to turn except by dashing straight ahead for a considerable length and then gradually turning like a wagon (which almost got him killed at Brandy Station); to Yank, an uncomfortable ride about which the less said the better.
Posted by Dur Ecu at 9:20 PM No comments:

As the title indicates, this book tells the story of Sgt. Robert William Parker’s Civil War service, spent predominantly in the ranks of the 2d Va. Cav., through his letters to his wife, Beck, and his parents. Parker is thought to have been the last soldier of the Army of Northern Virginia killed in action, and he is buried in the Confederate Cemetery at Appomattox.

The book is elegantly and knowledgeably edited by the young scholar Catherine M. Wright and provides a rare glimpse into the wartime experiences of a common soldier of the mounted arm, where the war was anything but “swords and roses.” Then, as now, communication with loved ones was vital in sustaining the morale of the individual faced with privation and suffering far from home.

Parker fought in numerous battles and actions, large and small, including First Manassas, Kelly’s Ford, Brandy Station, Aldie, Gettysburg, the Overland campaign, and of course, Petersburg and Appomattox. This is a fascinating read, even at times exhilarating, but overlaid with sadness.
Posted by Dur Ecu at 3:59 PM No comments: 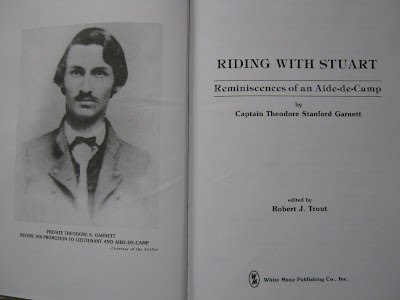 Garnett (d. 1915) was an aide-de-camp to Confederate cavalryman Gen. Jeb Stuart, and this slim volume provides his reminiscences of the period October 1863-May 1864. Very ably edited by Robert J. Trout, who perhaps knows Stuart’s military household as well as anyone, its centerpiece is Garnett’s “Continuation of War Sketches,” covering Auburn, the Mine Run campaign, and the Overland campaign through Yellow Tavern and Stuart’s death.

Garnett’s recollection of Stuart’s mortal wounding at Yellow Tavern is perhaps the most expansive we have and is quite valuable in its own right.

The book also includes a biographical sketch of Garnett by editor Trout and the text of Garnett’s address delivered at the unveiling of Stuart’s equestrian monument in Richmond, Va., in 1907.

Garnett was a perceptive young man, and his reminiscences, though written many decades after the events they describe, provide a glimpse of a period little discussed in other memoirs of Stuart’s headquarters.