This was a precursor conflict of the Thirty Years’ War – in a sense like the Russo-Japanese conflict in Manchuria in the run-up to World War II. The war was an attempt by the Venetian Republic to end the depredations of the Uskok pirates in the Adriatic. The Uskoks, based at Senj, were refugees who had fled from their native lands as the Turkish Empire expanded into the Balkans. As vassals of the Austrian Archduke Ferdinand, they were under his protection. When the Venetians moved against them, Ferdinand was drawn into the conflict. Ferdinand was joined by his brother-in-law, King Philip III of Spain. Venice was supported by troops from Holland and England.

The war theater was quite small. The fighting took place largely in the Austrian province of Friaul (Istria) along a front roughly defined by the Isonzo River. The major event was the Venetian siege of Gradisca. There were many small actions in the countryside that were characteristic of partisan warfare and cavalry security operations. AR Dampierre took part in many of these, as follows:

In these operations, AR Dampierre sometimes acted as part of a task force that included 300 Polish horse and 600 Hungarian foot.

The war was concluded by the Treaty of Madrid in which Venice achieved its objectives with the complicity of the Austrians. Some of the Uskoks’ leaders were executed, and the Uskoks themselves were removed to the interior, where in future they would be more useful in fighting the Turks.

AR Dampierre moved on to participate in the Bohemian War.
Posted by Dur Ecu at 11:55 AM No comments:

Dampierre’s regiment was the oldest mounted arquebusier regiment in the lineage of the “modern” Royal and Imperial Army.

Notice that the unit existed from 1616-1623, when it was “reduced,” which I think means reduced to cadre. The regiment initially consisted of three companies. Subsequently, two additional companies were added.

In 1618, a company under Mons d’Espaigne was added. (I am not sure that the “Mons” does not represent “monsieur,” and the records do not indicate one way or another.)

Next post: War in Friuli, or Uskok War
Posted by Dur Ecu at 4:44 PM No comments: 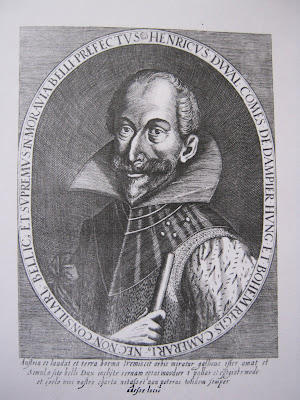 A Frenchman by birth, Dampierre was a major actor in the Bohemian War until he was KIA at Pressburg. He had been in imperial service since 1602, fighting generally in the eastern borderlands and against the Republic of Venice and learning his craft under such renowned commanders as Giorgio Basta. He had the command of a unit of mounted arquebusiers in 1609 and subsequently commanded units and mixed task forces that consisted of a variety of mounted types and Hungarian infantry. During this period he became skilled in all facets of warfare, ranging from partisan warfare to siegecraft and battles and encounters. He was oberst-inhaber (colonel-proprietor) of Arquebusier Regiment (AR) Dampierre (1617-1620), a unique unit that Dur Écu will profile in a future post, and he was promoted to Obristwachtmeister zu Feld über alles Kriegsvolk zu Ross – essentially commander of the imperial horse – during the Bohemian War.

Following the death of the Emperor Matthias (Mar. 20, 1619), the revolt against imperial authority mushroomed, and support for the Archduke Ferdinand’s candidacy for the vacant imperial crown ebbed away. A Bohemian army under Thurn blockaded Vienna and Hungary joined the revolt. At the height of the crisis, Dampierre led his splendid regiment (subsidized by Ferdinand’s younger brother Leopold) into Vienna with banners flying and trumpets sounding (June 5, 1619), parading before the Vienna Hofburg in a dramatic show of support for the archduke that cowed his immediate enemies and caused them to flee the city.

Dampierre’s theatrics, combined with the news of Bucquoy’s victory over Mansfeld at Zablat on June 10th, began the decline of the revolt, which was crushed at the Battle of the White Mountain outside Prague (Nov. 8, 1620). 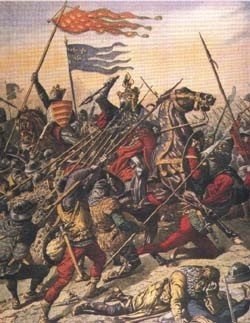 The question arose: How far from the front were the horses of the dismounted men ordinarily “held”? Interesting that, since Dur Écu has rarely found mention of horse-holders in the historic record, much less particulars of their craft.

It would seem, from the manuals that 100 yards was the prescribed distance. For example, McClellan in Regulations and Instructions (1862), wrote:

“The horses will be habitually kept at about one hundred yards in rear of their riders, though they should be nearer when they can find shelter from fire which will admit of it. Fifty yards will be far enough when the enemy does not use fire-arms.”

I have seen these distances prescribed in other contemporary manuals. There is no reason to believe that they did not obtain in earlier periods.

McClellan also noted that the horse-holders were to remain mounted throughout.

If the horse-holders and the led horses were too far from the firing line, disaster could ensue if the enemy got between the line of dismounted men and their mounts.
Posted by Dur Ecu at 1:28 PM No comments: 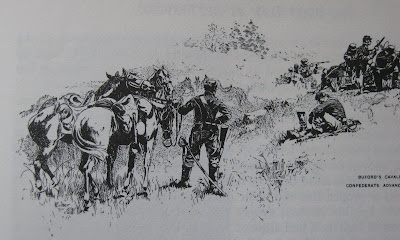 Horse-holder is a term that seems to have so far fallen out of usage that I can’t find it in my NSOED. With the passing of dragoons and dismounted cavalry, there’s not much, if any, call for them. Maybe they were never very popular; vide Kipling:

“The new fat regiments come from home, imaginin vain V.C.’s
(The same as our talky-fighty men which are often Number Threes)”

Despite Kipling’s indictment of “talky-fighty men,” who exist at all times and in all arms and branches, the role of the horse-holder was of vital importance, first in the dragoons, who from their first apparition dismounted to fight on foot, and later among the cavalry of the 19th c., beginning with the American Civil War, who fought with equal skill mounted and dismounted. Mainly, they kept the mounts of the men on the firing line in hand, out of harm’s way, and ready to meet any offensive or defensive circumstances that eventuated.

Dur Écu did a quick, imperfect survey of the proportion of horse-holders to shooters and found:

The proportions shown seem to have reflected the relative proportion of shooters needed to put up a credible defense (by fire combat) with weapons and doctrine in use at different periods. I say seem, because I think this needs to be investigated further.
Posted by Dur Ecu at 7:58 AM No comments: 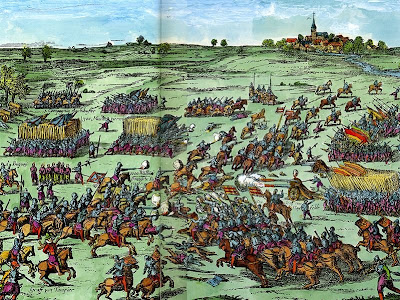 This is an interesting contemporary depiction of the complete defeat of a contingent of the Bohemian rebels commanded by the freebooter Peter Ernst, Graf Mansfeld by an Imperialist army under Charles Bonaventure de Longueval, comte de Bucquoy. It shows at a glance the problem of the rebels in the fight: their cavalry, brave but wholly inadequate numerically and in terms of its military efficiency, was swept from the field, and the infantry was left to fend for itself.

Mansfeld escaped the disaster with the remnant of his cavalry, and the infantry, after a brief resistance in a wagenburg (wagon fortress formed by laagering the 200 pack wagons of the army), surrendered and took service with Bucquoy’s army.

The battle was a major turning point of the Bohemian Phase of the Thirty Years’ War as it was a severe check that marked the beginning of the inexorable decline of the rebel army. The Imperialists lost a handful of men, while Mansfeld’s contingent had probably 400 KIA and 1,200 CMIA of the 3,000 with which it began the fight. (Although Mansfeld himself believed he had lost 4,000 men!)