The Renaissance and the Crisis of the Italian Military 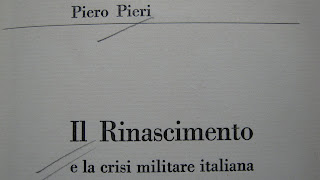 This was, and I expect remains, the principal general source for the military history of the Italian states during the transition from medieval to modern warfare that took place (rather rudely for Italy) during 1494-1530. It is a truly magisterial work, encompassing 661 pages. While it is military history primarily, the author is careful to examine the economy, industrialization, agriculture, finance, and social classes in Part 1. Part 2 is given over entirely to military history. This is a superb source for the battles of the Italian Wars in the period.
Posted by Dur Ecu at 2:27 PM No comments:

From Pavia to Rocroi 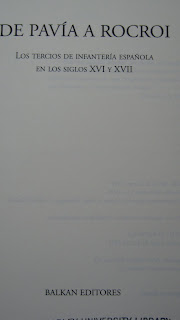 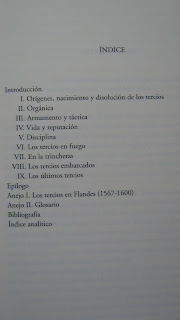 A very interesting examination of the Spanish tercio from many different standpoints. I haven't had a chance to do more than skim it, but I've already found it quite useful in some respects. The table of contents is posted, so that you can get an idea of the author's coverage of the subject. The glossary particularly, though spare, is useful. There are no footnotes, and the bibliography is keyed to the chapters (not necessarily helpful, but it does at least give an idea of the foundation of the author's thoughts).
Posted by Dur Ecu at 6:35 PM No comments: 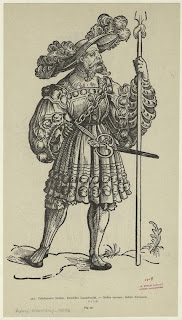 Landsknecht (NYPL)
Or, the Perils of Renaissance Military History.
While plowing through the essays in Italy and the European Powers, I discovered in one that: “The Black Bands of Guelders, one of the most prestigious Landsknecht contingents, whch fought for the French at Marignano (1515), had 12,000 pikemen, 2,000 arquebusiers, 2,000 swordsmen and 1,000 halberdiers.” Well, says I, this is interesting. That’s a lot of soldiers (17,000) to be gathered together in a single formation or formation-like rubric. Moreover, the reference to “swordsmen” in such numbers attracted my attention, since as those who know my thoughts on swordsmen know, I’m a skeptic of the sword-and-bucklermen so beloved of renaissance military historians from the time of Giovio and Macchiavelli onwards.

So, naturally, I checked the author’s footnotes. As is the case with so much of this particular article, I was referred to another secondary source. In other words, the author, himself a distinguished scholar, was referring me to the work of another distinguished scholar. This is just sloppy scholarship, and I dare say would be unacceptable in a post-graduate paper.

Having the referenced source to hand, I found that aside from the minor corruption of details and a few of the numbers that comes with the territory, the facts were more or less as stated. But, when I looked for scholar no. 2’s source, I was referred to yet another secondary source! Fortunately, scholar no. 3 (also to hand), cited his primary sources, and, mirabile dictu, the 17,000 landsknecht of scholars 1 and 2 were not the Black Band after all. No, those were other landsknecht. The Black Band numbered about 6,000 in addition to the others, and the original source provided no breakdown by weapon type for them.

Now, it really didn’t take me too long to chase down the facts, but I wonder what all this says about serious scholarship on renaissance military matters.

Oh, those swordsmen. Turns out they weren’t the elusive sword-and-bucklermen after all. They were landsknecht armed with two-handed swords – rather a different type of swordsman than the sword-and-bucklerman.
Posted by Dur Ecu at 12:20 PM No comments: