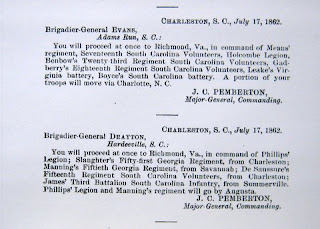 Above: Excerpt from OR, 14:644 outlining the initial organization of the brigades of generals Nathan G. "Shanks" Evans and Thomas F. Drayton, when ordered north from the Confederate Department of South Carolina, Georgia, and Florida by Gen. John C. Pemberton to reinforce the Army of Northern Virginia.

Of interest is the assignment of the 3d S.C. (Laurens or James) Bn. to Drayton's Brigade from its inception, although as we noted earlier, it disappears from the subsequent official record. At this time, the brigade's organization was as follows:

The brigade numbered approximately 2,600 men at this time. Colonel Slaughter was MWIA at Chancellorsville, Colonel DeSaussure was KIA at Gettysburg, and Colonel James was MWIA at South Mountain.
Posted by Dur Ecu at 4:23 PM No comments: 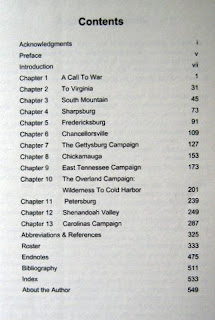 Thus far, I have read Sam B. Davis’ unit history of the 3d S.C. Inf. Bn. through the aftermath of the Battle of Antietam. To that point, the battalion had participated in three battles in the space of 21 days and had been reduced in strength from about 300 men to a remnant of perhaps 30 or so who retreated from Antietam. At South Mountain it had been practically annihilated in the fierce combat at Fox’s Gap – an epic fight that has been more or less obscure in the history books until revealed and explained by Mr. Davis and the small band of historians who together researched and analyzed the story of the Fox’s Gap fighting over many years and unselfishly shared their efforts and particular expertise among themselves.

The Table of Contents shown above will indicate the participation of the battalion in the Civil War and the scope of Mr. Davis’ work.
Posted by Dur Ecu at 6:50 PM No comments: 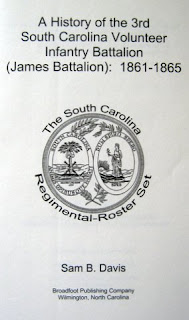 We have previously mentioned this infantry battalion as a unit belonging to Drayton’s Brigade during the Virginia and Maryland campaign of August-September 1862. And, we have mentioned that its presence with Drayton during that campaign is largely missing from the official record and subsequent histories. This inexplicable and mysterious lacuna has been filled most admirably by the unit history cited above.

The battalion was organized in the Laurens District of its home state beginning in late November 1862. Eventually, it consisted of seven companies (A-G), of which five were from the Laurens District and one each from Columbia and Fairfield. Originally assigned to defensive duty on the southeast South Carolina coast, it saw no real combat action until after it joined the Army of Northern Virginia for the Second Manassas campaign.

During the course of the war, 897 men served in the battalion, but it appears that it never numbered more than 400 men for duty in the field. It was also known as “the James Battalion” after Lt. Col. George Strother James, who was its commanding officer from Feb. 2, 1862, until his death at South Mountain on Sept. 14, 1862. A veteran of the Mexican War (Palmetto Rgt.) and pre-Civil War service as an officer in the U.S. Army, James was famous in his time as the man who had fired the signal gun for the bombardment of Fort Sumter. 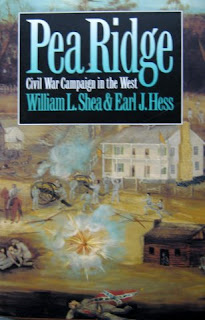 This superb book describes the intense fighting at the Battle of Pea Ridge (Elkhorn Tavern), Arkansas, in March 1862, that turned back an attempted Confederate invasion of Missouri from northwestern Arkansas. It was, until recently, the only comprehensive, scholarly modern history of the battle. Well-researched, competent, and complemented by 18 attractive, useful maps, it remains a classic of the genre.

Additional information on the Battle of Pea Ridge may be found in a tour guide to three major western battles located on the old Wire [Telegraph] Road that traversed the Ozark Plateau between Springfield, Missouri, and Fort Smith, Arkansas.
Hess, Earl J., and Christopher Lawrence Brest. Wilson's Creek, Pea Ridge, and Prairie Grove: A Battlefield Guide, with a Section on Wire Road. Lincoln: University of Nebraska Press, 2006.

According to various chronologies of the Maison du roi, this company of the Garde du corps (royal bodyguard) was created in 1440 or 1445. It was the 1st or Scottish Company and originally was composed of 100 men-at-arms and 100 archers. Three French companies, numbered 2d through 4th, were created subsequently. The company generally had a Scottish or Franco-Scottish captain, at least until 1559, when as we have seen, Montgomery accidentally mortally wounded the king. Apparently, he was the last of the Scots captains. The personnel were originally entirely Scots, but gradually French noblemen came to predominate, and by 1612 approximately two-thirds of the troopers were French.
Posted by Dur Ecu at 6:12 PM No comments: 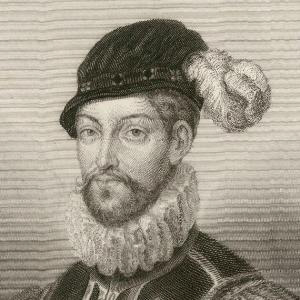 The website of the Archives of the Department of the Manche today profiled Montgomery as “Manchois” of the month. Access at: http://archives.manche.fr/manchois-du-mois-details.asp?card=7272568

The French aristocrat was most famous for the accidental mortal wounding of King Henri II in the famous tournament held in 1559 in the Marais at the site known today as the Place des Vosges. He was also one of the more daring of the Huguenot war leaders until his capture and execution.
Posted by Dur Ecu at 2:27 PM No comments: 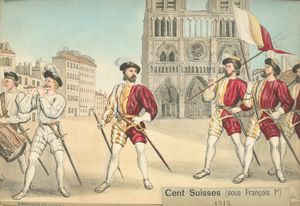 Cent-Suisse in the reign of King Francis I. These guardsmen wear a good example of the mi-parti uniform. As you look at the illustration, the left side is mi-parti yellow and white and the right side a reddish-orange color. The plumes and cap would continue these colors. A large number of plumes would signify a veteran of long service. The shaft of the halberd was violet, as was the scabbard of the longsword. The music of the Cent-Suisse consisted of four drummers and two fifers. Musicians wore white (NYPL). 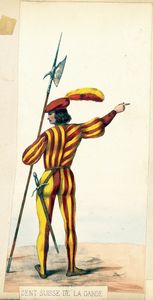 Another view of a Cent-Suisse guardsman. The mi-parti uniform is not otherwise identified or attributed to a royal livery (NYPL).

The elite corps of the Swiss in the French army was the Company of the Cent-Suisse (Hundred Swiss) of the Garde du Roi. Instituted by Charles VIII in 1496, these men served as a bodyguard to the king and protected his residence. When the king was on the march or in the field, he was preceded by the Cent-Suisse carrying halberds. In wartime, the Cent-Suisse wore a light corselet. Their dress was in the colors of the king’s livery. A custom instituted under Charles VIII was to provide each man with plumes and two uniforms in the king’s colors each year. The plumes were never discarded, being quite valuable, and veterans were colorfully festooned with the accumulation of years of service. Under Henri II, the livery was black and white.
Posted by Dur Ecu at 9:24 PM No comments: