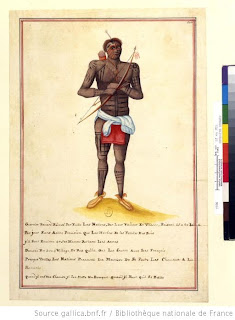 While browsing the superb website of the Bibliotheque nationale de France (gallica.bnf.fr) today, I came upon this striking image labeled "Guerrier Renard." It's a watercolor depicting a warrior of the Fox tribe in 1731. The Fox, an Algonquian people, were noted as warlike and appear to have been held in rather low regard by both the French and their Indian neighbors. At that time, they inhabited the region around Green Bay and Saginaw Bay in Wisconsin and Detroit in Michigan. They appear to have had the distinction of being the only tribe against which the French warred. This image represents a people rather outside the bounds of the blog, but it's so impressive, I just had to share it.
Posted by Dur Ecu at 5:43 PM No comments: