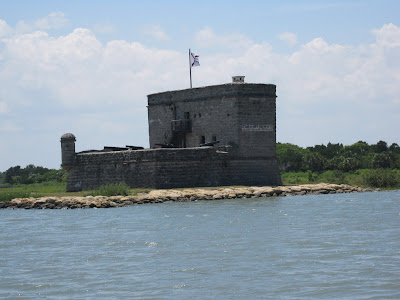 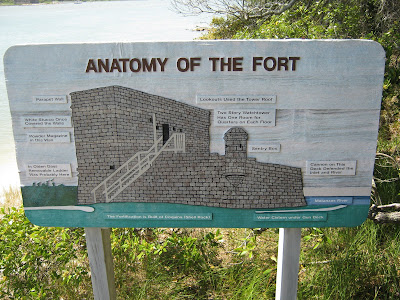 Top: Fort Matanzas from the ferry slip.
Above: This informative placard is at the entrance to the ferry slip.
The entrance to Fort Matanzas National Monument is off SR A1A just south of the town of Crescent Beach on Anastasia Island. There is a small visitor center adjacent to the parking area. Conveyance to the fort from Anastasia Island is via a passenger ferry, which operates from 9:30 a.m. to 4:30 p.m.

The FMNM website is at www.nps.gov/foma
Posted by Dur Ecu at 7:06 AM No comments: 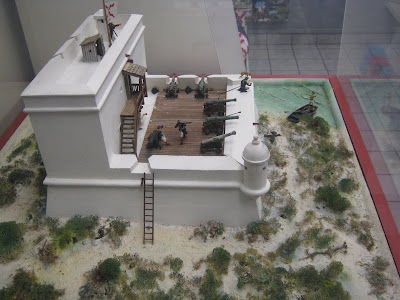 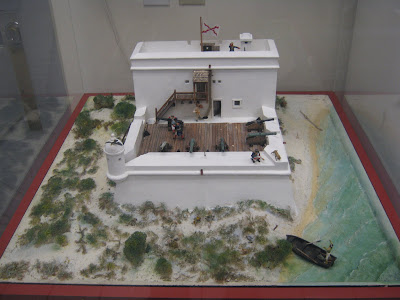 Above: Two views of the model of Fort Matanzas in the national monument's gift shop.

Dur Écu visited Fort Matanzas National Monument near St. Augustine, Fla., recently. The fort – really a strong watchtower – is located on Rattlesnake Island (I kid you not!) on the Matanzas River, just north of Matanzas Inlet (of which more later) and about 14 miles south of St. Augustine. Constructed during 1740-42, its purpose was to defend the approach to St. Augustine along the river, which flows west of Anastasia Island, the barrier island in the area.

Despite its small size (50-feet square and 30-feet high), it was a remarkably strong fortification, mounting five guns and garrisoned usually by one officer and seven-ten men detached from the St. Augustine garrison for a tour of duty of one month.

Although not strictly speaking pertinent to our exploration of 16th-century La Florida, the fort, with its simple, box-like structure is an appealing candidate for modeling.

Matanzas – Spanish for “slaughters” – took its name from the massacres of French Huguenots of the Ribault expedition at the inlet in 1565.
Posted by Dur Ecu at 7:45 AM No comments: