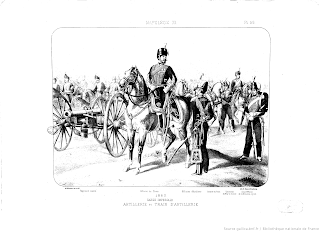 After the Crimean War, the standard French bronze 4-lb SBML light field guns were rifled on a plan devised by Col. Treuille de Beaulieu. Although the elongated projectile fired by the new rifle gun was heavier than the old four-pound ball of the smoothbore, the new gun retained its old designation. The service life of the tube was 1,200-1,500 rounds. When the rifling was worn, the gun was recast, “an operation of no great difficulty.”

Leaders of the Lost Cause (2) 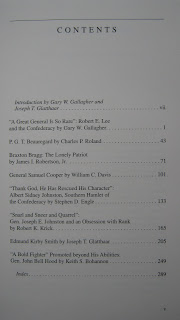 Returning to this interesting book, I thought that I’d mention an interesting approach that editors Gary W. Gallagher and Joseph T. Glatthaar took to the selection and assignment of authors to subjects. Essays were assigned to authors who had never previously written on the particular subject. Although this could not be followed completely, the essays largely do provide fresh views on the subjects and are free from the crippling hagiography and “amen chorus” aspects so often encountered in similar collective biographies. In addition, the authors were asked to look closely at the pre-war careers of their subjects -- an aspect of biography that often suffers in popular works.
Posted by Dur Ecu at 5:26 PM No comments:

Leaders of the Lost Cause 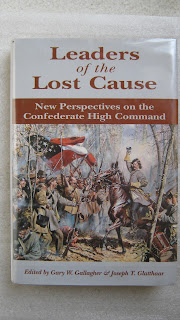 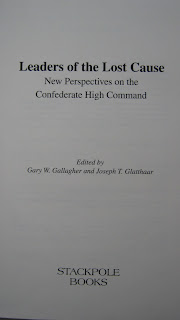 This handy volume provides biographical and interpretive essays on eight Confederate general officers who attained the rank of full general (equivalent to four-star) during the course of the U.S. Civil War. These men were: Robert E. Lee, P. G. T. Beauregard, Braxton Bragg, Samuel Cooper, Albert Sidney Johnston, Joseph E. Johnston, Edmund Kirby Smith, and John Bell Hood. In addition, the editors, in their Introduction, profile Confederate President Jefferson Davis, “the common thread among these officers, to whom they were beholden for their appointment.” This in itself is an important and essential essay that knits the others together in a useful fashion.
Posted by Dur Ecu at 12:01 PM No comments:

The Florida Brigade at the Battle of Gettysburg 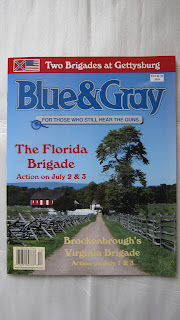 The latest issue of Blue & Gray (Vol. 27:4) arrived recently, and by coincidence, the feature article focuses on the combats of the Florida Brigade of the Army of Northern Virginia at Gettysburg.﻿ In the battle, the brigade, consisting of the 2d, 5th, and 8th Florida regiments, saw action on July 2d and 3d in the attacks against the Federal III and II Corps along the Emmitsburg Road between the Rogers and Codori farms (July 2) and in the follow-on attack to Pickett's Charge, mounted by two brigades of Anderson's Division in the same area (July 3). This is a nice complement to the Waters and Edmonds book described in my last post.
Posted by Dur Ecu at 2:10 PM No comments: