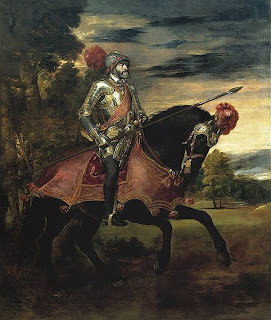 The Emperor Charles V at the Battle of  Mühlberg by Titian
This was a Spanish term for reiter-type heavy cavalry. Verdugo’s editor indicates that they were German cavalry, not necessarily Spanish (Verdugo, Francisco [1537-1595]. Commentario del coronel Verdugo de la guerra de Frisia, en XIII años que fue governador y capitan general de aquel estado y exercito por el rey D. Phelippe II, nuestro senor.)
The name probably came from the application of the Spanish term for a short coat with a collar but no cape (herreruélo or ferreruélo) to the armor worn by the reiters. This armor, according to Nuñez de Alba (Dialogos del soldado) first appeared in 1547 in the Schmalkaldic War. The Titian portrait of the Emperor Charles V in his “Mühlberg harness” is a good example of this armor (at least as worn by a wealthy warrior). The armor worn in the portrait consists of: back- and breastplates; taces; tassets; gorget; espaliers reaching to the elbow over mail sleeves; gauntlets; and morion. The emperor is armed with a javelin and a pistol.
Posted by Dur Ecu at 4:37 PM No comments:

Flags of the French Religious-Civil Wars (1) 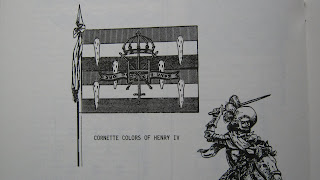 Cornette of King Henry IV of France
There are many descriptions of this color, preserved in letters of the period. The field is striped (from the top) red, white, blue, red, white, blue. The devices are as follows: clubs (or maces) of Hercules – white; all other devices (including sword, crossed sceptres, and the cypher “H” surmounted by a crown) – yellow or gold. The motto is DVO PROTEGIT VNVS (DUO PROTEGIT UNUS = Two Protected One).
Posted by Dur Ecu at 4:25 PM No comments:

Commemoration of the Battle of Montcornet, 1940

A friend sent along this web page http://www.minitracks.fr/montcornet_2010.htm with YouTube vid and numerous pics showing reenactors and restored French (and Belgian) vehicles at the 70th anniversary commemoration of the Battle of Montcornet (May 14-16, 1940). Just outstanding!
Posted by Dur Ecu at 1:54 PM No comments: 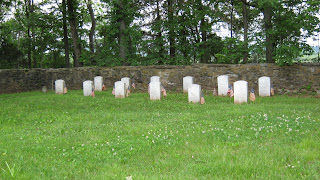 Fieldstone Markers for Federal Cavalrymen Killed in the Action of
July 6, 1864
Major Mosby's partisan rangers destroyed the command of the "Fighting Major" William H. Forbes (2d Mass. Cav.) in a sharp fight along the Little River Turnpike near the Mount Zion Old School Baptist Church. Forbes had been hunting Mosby, but the "Gray Ghost" turned the tables on him in one of his most brilliant fights. No one knows exactly where the Union cavalrymen were buried in the church graveyard.
Posted by Dur Ecu at 6:18 PM No comments: 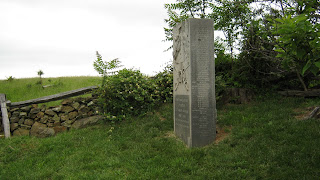 Monument to the 1st Mass. Cav. west of Aldie, Va.
The monument marks the location of desperate fighting on the Snickersville Turnpike on June 17, 1863. The 1st Mass. was practically destroyed in close combat with the 2d and 3d Va. Cav. under the command of Col. Tom Munford, C.S.A.
We visited Aldie and Middleburg today and enjoyed the splendid, partly cloudy weather of the early afternoon. Beautiful Virginia horse country, not much changed in many respects from the days of Mosby and Stuart.
Posted by Dur Ecu at 5:00 PM No comments: 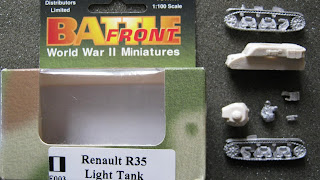 This is a 15mm (1:100 scale) Battlefront (Crusader) mini depicting the familiar French light tank that also saw service with several other armies in World War II (for example, Poland and Romania) and in the early post-World War II conflicts. The kit consists of seven parts. There are two resin castings – a hull and turret – and five cast metal pieces: gun (with cradle), running gear with tracks (2), tank commander, and rear hatch. The model can be built with or without the tank commander/rear hatch combination, and I chose to omit it, since it looks a bit fiddly, and it isn’t clear exactly how one is to fit it to the turret rear or rotate the turret if it simply rests on the rear deck abutting the turret.
The R35 was considered an infantry tank and was the successor to the venerable FT-17 of World War I. In many respects, it was unsuited to the modern battlefield, since it was slow, lightly armored, and possessed a weak main gun.

Nothing to report as yet, since I've just picked it up.
Posted by Dur Ecu at 4:40 PM No comments: 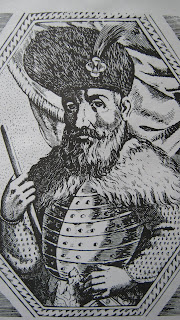 Basta, Giorgio (b. La Rocca, near Taranto, Jan. 30, 1550-d. Prague, Nov. 20, 1607). Basta was an Imperial (Holy Roman Empire) general and a military theorist. He served in the French-Spanish hostilities of 1589-1593 and the Ottoman-Hapsburg Long War (1593-1606).
Basta's family was of Albanian or Greek ancestry, like many of the refugee stradiotti (soldiers) who fled to Italy following the Turkish conquest of the Peloponnese (Byzantine Morea).

His earliest military experience was in the Spanish army, and he rose to prominence as a cavalry commander in Flanders and protégé of Alexander Farnese, Prince of Parma, Spanish commander in the Netherlands. At the siege of Antwerp (1584-1585) his light cavalry controlled the countryside and prevented the re-victualling of the city, which was decisive. In 1590, he was appointed commissary-general of Parma's cavalry. He campaigned in support of the Catholic League in northern France (1591-1592) and served under Charles von Mansfeld (1593). He fought against French King Henry IV in Guise (1593) and was promoted to lieutenant general. After the death of his patron, Parma, he entered the service of Hapsburg Emperor Rudolph II as general of cavalry (February 25, 1598).

In the emperor's service Basta won fame in the reconquest of Transylvania (1599-1605), leading the Imperial armies against Sigismund Bathory, Prince of Transylvania, and his allies. He contended also against Michael the Brave, voivode of Wallachia (executed by Basta on August 18, 1601), and against Stephen Bocskay and Bethlen Gabor. Appointed Imperial commander in chief (January 20, 1602), Basta took the fortress of Khust (1603), for which he was created a count. He retired in 1605, and devoted himself to writing military treatises based upon his experience.

His first book was Il maestro di campo generale (1606). According to González de León, Road to Rocroi, 136n, this was a plagiarism of Lechuga’s Discurso del cargo de maestre de campo general. (It probably should be pointed out that plagiarism then, especially of technical texts, was rather more common and unexceptional than it is today.) His most important work, Il governo della cavalleria leggera (1612), was an influential textbook on the organization, management, and employment of light cavalry; another work, Del governo dell'artiglieria, was published in 1610. His works were translated into other languages and widely read, and helped to inform European military practice and doctrine before, and during, the Thirty Years' War.

Giorgio Basta rose from obscure origins to high command in the Spanish and Imperial armies during a transitional period in the development of the military art. He was a resourceful general who, like Montecuccoli and Saxe, passed on in his writings lessons gleaned from decades of campaigning. He wrote a practical guide to the employment of light cavalry, an arm often encountered but little understood by western European generals of his day. He is justly renowned as one of the greatest generals of his time.

The Road to Rocroi

Personally, I used the work to provide many biographical details on the officers associated with the army, as a primer on the professional military literature of the late 16th-early 17th centuries, and as yet another – in this case very full – narrative and analysis of the decisive Battle of Rocroi (1643), which of course is seen as marking the end of Spanish military ascendancy in Europe.
Posted by Dur Ecu at 5:32 PM No comments: 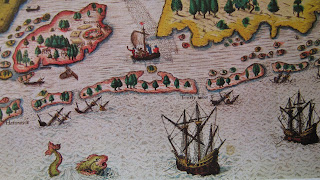 Above: The English settlement at "Roanoac" (present-day Roanoke Island)
The brief existence and mysterious disappearance of Sir Walter Raleigh's colony continue to vex scholars. Roanoke was close to the northern margin of La Florida. A possible solution to the mystery of the "Lost Colony" is set forth in:
Horn, James. “Roanoke’s Lost Colony Found?” American Heritage, 60:1 (Spring 2010), 60-65.
Worth a read.
Posted by Dur Ecu at 5:12 PM No comments: