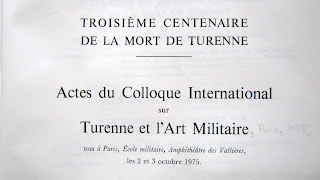 Colloque international sur Turenne et l'art militaire, and Fernand Louis Gambiez. Actes du Colloque international sur Turenne et l'art militaire: tenu à Paris, École militaire, Amphithéâtre des Vallières, les 2 et 3 octobre 1975. [Paris]: Les Belles lettres, 1978.
Napoleon famously said: “The principles of warfare are those which guided the great captains whose high deeds history has transmitted to us—Alexander, Hannibal, Caesar, Gustavus Adolphus, Turenne, Eugene of Savoy, Frederick the Great….The history of their eighty-three campaigns would constitute a complete treatise on the art of war; the principles that must be followed in defensive and offensive warfare would flow from it as from a common source.”
My current reading includes this scarce volume, which is a collection of essays delivered in Paris by eminent military scholars to mark the 300th anniversary of the death in battle at Sasbach, Germany, of the great marshal-general. Although like all such collective works the quality of the many contributions vary, there is much here that I've found useful, new (to me), even provocative. And, I am not unfamiliar with the literature on Turenne, which is rather extensive. But, this is the first opportunity that I've had to read this volume, and I'll share my observations in coming posts.
Posted by Dur Ecu at 5:03 PM No comments: 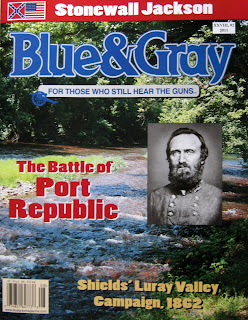 The latest issue of Blue & Gray magazine arrived recently. The focus of this issue is apparent from a glance at the cover (above). The principal author and guide to the sites covered is Gary L. Ecelbarger, who (to my mind at least) is the reigning expert on "Stonewall" Jackson's Shenandoah Valley campaign of spring 1862.

Labels: Battle of Port Republic, US Civil War, Worth Reading 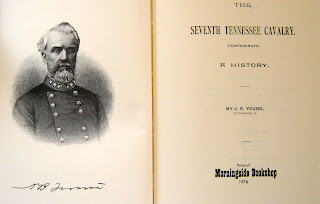 Young, John Preston. The Seventh Tennessee Cavalry (Confederate): A History. Dayton, Ohio: Press of Morningside Bookshop, 1976.
This is a facsimile reprint of the original printing by M. E. Church, Nashville, Tenn., 1890. It is a fairly straightforward narrative history of the service one of Forrest’s regiments (Forrest himself enlisted as a private in Company D of the regiment on June 14, 1861.). This history is chiefly interesting for its accounts of Brice’s Cross Roads and Tupelo, plus the fighting in Hood’s disastrous Franklin and Nashville campaign. There is, besides, a detailed roll, pp. 152-227.
Posted by Dur Ecu at 2:16 PM No comments: 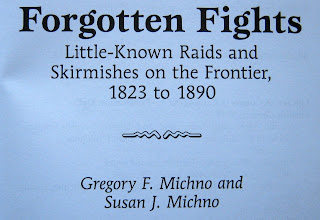 In this book, the Michnos (husband and wife) supplement the coverage of their earlier book, the Encyclopedia of Indian Wars (2003), with a detailed compilation covering about 300 small fights of the Indian wars during 1823-1890. These events were not included in the earlier publication. The book begins with a simple state-by-state chronology of the incidents examined. Each chronology is keyed to an outline map showing the locations of the incidents, plus rivers and forts and camps. This is followed by brief narratives of each event, in chronological order, from Skull Creek (Eagle Lake, Texas) in spring 1823 to Salt River (Globe, Arizona) on Mar. 7, 1890. In 1890, the frontier was declared “closed,” and the Indian wars ended. The authors’ brief Summary is sobering in its assessment of the enormous cost of the wars in human lives and property. The Notes, Bibliography, and Index are extensive and well-done.
Posted by Dur Ecu at 8:55 PM No comments: 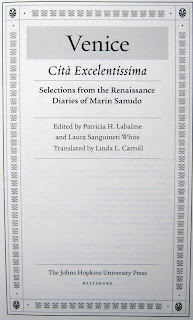 Sanudo, Marino, Patricia H. Labalme, and Laura Sanguineti White. Venice, Cità Excelentissima: Selections from the Renaissance Diaries of Marin Sanudo. Baltimore: Johns Hopkins University Press, 2008.
“No writer will ever make much of modern history who has not seen my diaries, within which is contained every event.” So wrote the Venetian historian Marino Sanudo (or Sanuto) in 1531. This book provides a wide-ranging selection of Sanudo’s large and largely-inaccessible writings in a superbly edited and annotated single volume. For those interested in the early Italian Wars and particularly the circumstances surrounding the shocking (at least to the Venetians) Venetian defeat at Agnadello (1509), this is a useful and interesting book.
Posted by Dur Ecu at 4:58 PM No comments: