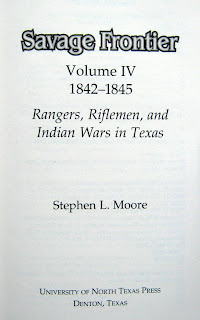 Before reading author Moore’s latest (and last) volume in his four-volume history of the Texas Rangers during the Republic of Texas era, I knew relatively little of the history of this fabled force of frontier fighters. I’m pleased to report I’ve been educated. As indicated by the citation, the present volume details events during 1842-1845, including two Mexican invasions of Texas (the Vasquez and Wall incursions, both in 1842) and the fierce fighting that resulted from them. Texan ripostes, including the Somervell and Mier expeditions, were ignominious failures. The bitterness of the conflict, including Mexican atrocities and maltreatment of prisoners, was such that the Rangers subsequently sought revenge and killed Mexican soldiers and civilians with such ruthlessness that American soldiers with whom they served in the U.S.-Mexican War were appalled. (It is only just to point out here that many Tejanos served in the ranks of the Rangers.)

Besides major conflicts, the book includes accounts of everyday peacekeeping on the frontier, chiefly the numerous fights against hostile Indians. It is worth noting that friendly Indians sometimes served in companies alongside the Rangers. Among the famous Rangers profiled are the legendary Capt. Jack Hays and Capt. Samuel Hamilton Walker, who helped design the famous Walker Colt, an early revolver that was adopted by the Rangers and the U.S. dragoons. (This was Clint Eastwood’s pistol in The Outlaw Josey Wales.) All in all, this book is a rewarding read. For war gamers, it will certainly provide inspiration for skirmish scenarios readily adaptable to rules sets like TooFatLardies’ Sharp Practice.