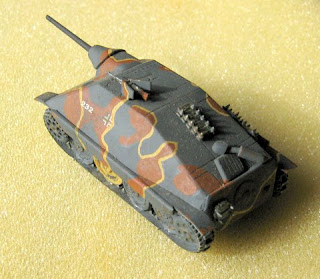 This light, reliable tank-destroyer was constructed on the chassis of the pre-World War II Czech LT vz 38 tank and mounted a 75mm Pak 39 L/48. Its nickname, apparently unofficial, translates as “baiter,” “instigator,” or in the colloquial “rabble-rouser.” The model in the photos is 1:76 scale and of unknown provenance, maybe Armtec or Modakit.
Posted by Dur Ecu at 3:01 PM No comments: 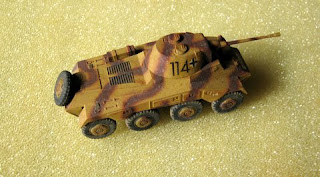 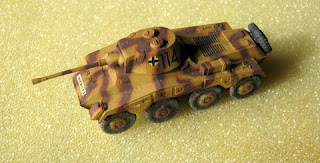 Some of my small collection of World War II vehicles are products of Roco Minitanks. These 1/87 (HO) scale plastic minis were at one time easy to find in hobby shops, especially model railroad shops -- which is what most hobby shops are wherever I’ve lived or visited. The photos show  Roco’s No. 122, the German SdKfz 234/2 8-wheeled armored car or “Puma.” Since the Puma mounted a 50mm L/60 KwK 39/1, it was rather a nasty character to encounter on the point.

Generally speaking, these models are just adequate by today’s standards. In their heyday, though, they were much sought after for wargaming, as there was not the selection of models widely available today. It was easy to tart them up with a quick paint job and even superdetail them (model railroad term) with bits and bobs from the parts box, hand-grabs, antennae, etc. Despite objections from some, they could be mixed with 15mm figures and were relatively sturdy.
Posted by Dur Ecu at 3:16 PM No comments: 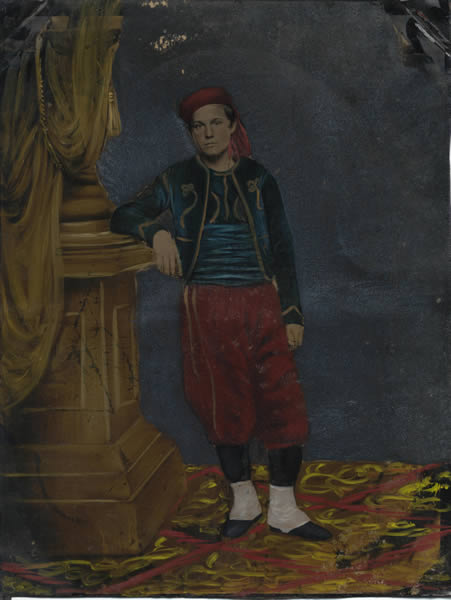 This wonderful colorized photograph is a bit dark, but nonetheless worth a few moments of your time. It depicts a soldier belonging to the celebrated (or notorious) Gen. Daniel E. Sickles' Excelsior Brigade and is drawn from the website of the New York State Military Museum:  http://dmna.state.ny.us/historic/mil-hist.htm

As I continue with my research for scenarios of the Peninsular Campaign of 1862, I am of course having to characterize leaders, units, and formations. With respect to New York State, I've found the site referenced above not only an excellent point of departure but also an unparalleled resource. It covers NYS units from the Revolution through the Korean War.
Posted by Dur Ecu at 3:58 PM No comments: 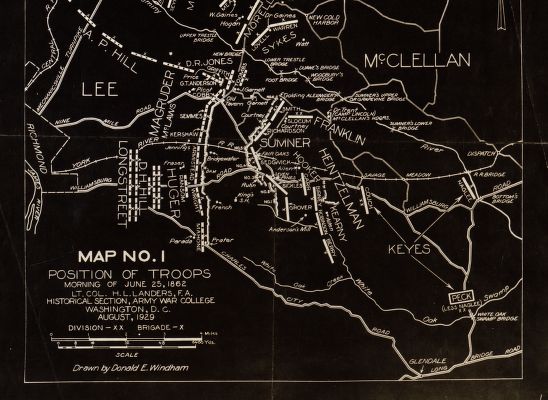 Above: Part of a map showing the "Position of Troops, Morning of June 25, 1862." Huger’s Division’s position is shown at left center toward the top of the legend. This map was probably the principal source for Sears’ map of Oak Grove in To the Gates of Richmond. Source: Library of Congress. Geography & Map Division. Landers, Howard Lee, and Donald E. Windham. [Seven Days' Battles, Virginia, June 25-July 1, 1862]. S.l: s.n.], 1929.

Earlier I mentioned the fact that Lee had informed President Davis that Huger was not at his post when McClellan’s offensive of June 25, 1862, hit Huger’s Division along the axis of the Williamsburg Road. This attack was of the greatest concern to Lee, since McClellan hit hard at the weakest sector of the Confederate line just a day before Lee himself launched his great offensive against the weak Federal right flank (at Mechanicsville). McClellan, by dumb luck struck the Army of Northern Virginia where it was most vulnerable and threatened to derange all of Lee’s plans for his own offensive.

Huger’s absence at the outset of the Federal attack was unforgivable. The pertinent sequence of events is best followed not in the Official Records, nor in the secondary literature, but rather in the following source:

I have previously quoted from Lee’s Dispatches the evidence that Huger was not at his post. Lee’s actions subsequent to this discovery are outlined in a letter to Davis (doc. 211, which appears to be misdated June 24) and doc. 212, Lee to his wife, dtd. June 25.

In doc. 211, Lee states that he was “called to the Williamsburg road” by the fighting on Huger’s front and that the “affair on the whole was not well managed.” Nonetheless, he was determined to stick to his overall offensive plan. He states that he ordered Huger to hold his lines “at all hazards.” So, it is apparent that Huger did join his division during the fighting and that Lee firmly reiterated his orders and expectations to him.

In doc. 212, Lee gives the time of his arrival and other facts that indicate his preoccupation with events on Huger’s front.

Knowledge of the entirety of the documentation of events that day (such as it is) will definitely help to improve the Oak Grove scenario I’m designing for TCHAE. Also, the time spent in working through these events has rather tempered my sympathy for Huger for his shabby treatment by Longstreet and Johnston after Fair Oaks.

West Point “gave us some dummies” 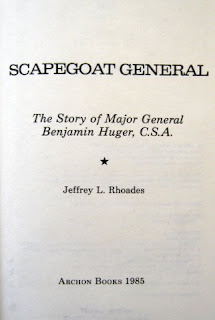 South Carolina’s John Cheves Haskell, who fought throughout the Civil War, losing an arm at Gaines’ Mill along the way, and married not only Wade Hampton’s daughter but also the daughter of Hampton’s brother Frank, left a memoir in which he mused that the first crop of major generals (division commanders) of what became the Army of Northern Virginia gave credence to “the charge, frequently made then and now, that we were handicapped by West Point.” The charge of course was an absurdity, but looking at it in Haskell’s context, where the army was reorganized into divisions commanded by G. W. Smith, Longstreet, Jackson, Holmes, Huger, and Kirby Smith, one is inclined to agree that, “The Academy certainly gave us some great soldiers, but it also gave us some dummies, who were grievous stumbling-blocks in our way.” And among those named, Haskell excepted Longstreet, Jackson, and “perhaps” Kirby Smith.

Regardless of how things turned out, when these fellows were appointed, they were conceivably among the best available, based upon objective criteria. Indeed Huger, who is currently under the microscope here, was so valuable to Robert E. Lee just prior to his fall from grace that Lee refused South Carolina’s governor’s entreaties that Huger be sent to Charleston to command the state’s defenses. Huger, Lee stated, was too valuable where he was: “He has always been regarded as an officer of great merit, especially as an artillerist.” But Huger was basely scapegoated for the Confederate failure at Seven Pines and his actions subsequently appeared to confirm the initial calumny – that he was too slow, not where he was supposed to be, not with his command, etc.

Which brings us to Oak Grove. Although Huger wrote a report of his division’s combat at Oak Grove, there is no indication that he was actually present at the events he described. In fact, on the very day of the attack, General Lee informed President Davis that Huger “was absent…Not at his qrs” and that he “had sent him an order to take his position with his troops & to remain with them.” However, having read Sears’ narrative of the battle (which appears to be the most complete account in the secondary literature) and other modern sources, only one mentions Huger’s absence (Dowdey’s The Seven Days), although the evidence for it is hiding in plain sight in the primary literature.

Now Huger’s absence from his command, particularly on the eve of a major offensive, would have been damning in Lee’s eyes. And both Sears and Dowdey report Lee going forward to the Oak Grove sector during the fighting. Curiously, Rhoades’ biography of Huger (see above) mentions neither Huger’s absence, nor Lee’s presence on the battlefield. It is possible that Huger was present later in the day (in response to Lee’s orders?). At least Sears indicates this, but it is practically impossible to link this fact to Sears’ footnotes the way they’re arranged, and I’m still awaiting the one source that I hope will confirm Sears’ narrative on this point.
Posted by Dur Ecu at 9:07 PM No comments: 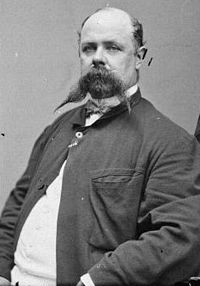 The website of Gatehouse Press (publishers of, inter alia, The Gettysburg Magazine and Morningside Books) provides an online newsletter that is well worth visiting on a frequent basis. I’m a big fan of historian Robert K. (“Bob”) Krick, not only for his unique take on the Civil War but also for his entertaining writing style. His two-part profile here http://www.gatehouse-press.com/ of General Ripley may provide a ready answer to the question posed in the header.

A Hot Day on Marye’s Heights 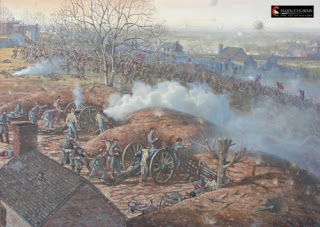 A new painting by Mark Churms shows the guns of the Washington Artillery of New Orleans in action on Marye’s Heights at the Battle of Fredericksburg (Dec. 13, 1862). The image was unveiled on the blog Mysteries and Conundrums today. For more information, see 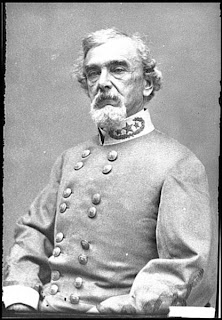 One of the objections to profitably gaming the 1862 Peninsular Campaign is a perceived leadership gap or disparity or however you might characterize it between the Confederates (Lee and the rest of the First Team, CSA) and the top-down incompetence of the woeful Army of the Potomac (McClellan and his comically-inept supporting cast). That’s the meme, and like most such constructions, it attains a life of its own, since it satisfies the requirements of those who like an easy answer, and tends to close off not only further inquiry or discussion but also serious analysis. I’m going to look into this a bit more in a future post, but as I proceed with my own research, I have to say, I haven’t actually detected an instance where the meme is “at work.” In short, there’s a lot of good gaming to be found in the various battles and engagements of the campaign.

Which brings us to Gen. Benjamin Huger, the putative Confederate commander at the Battle of Oak Grove (June 25, 1862), the first of the Seven Days’ Battles. Before going further, I thought I’d  provide a brief primer on the pronunciation of this amiable gentleman’s name:

Huger  –  HU • gee, u • GEE
To avoid instigating any feuds, we figure we'd better call this one a draw. It seems that everyone has a different idea about which pronunciation is "correct" in which area of the state. We think you're doing good if you just drop the "r" from the end ... with one exception. Huger Street in Chesterfield County is actually pronounced HUE • gur!

My own understanding, born of some long-forgotten reading, is incorporated in the label of this post.

Now Huger, “history tells us,” was the Confederate commander at Oak Grove. His opponents were Gen. Samuel Heintzelman and McClellan himself. I’ll address the question of Huger’s actual presence at the battle in a future post, but for now, I ask: Looking at these three, which side had superior leadership? Does the meme apply?