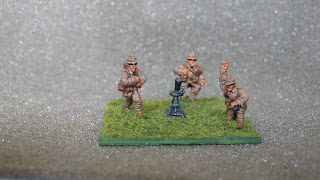 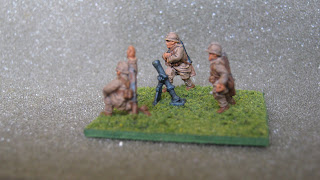 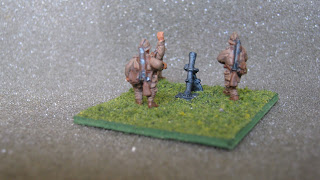 This was the common medium mortar in French service, and license-built copies, like the US 81mm mortar M1, or outright copies, were in widespread use with other armies. The typical French infantry regiment in 1940 had 8 such mortars; generally, 2 were allocated to each battalion. In FoF, the 81mm mortar might be drawn for with an Asset Card, if not included as part of the scenario design.


The photos show the Peter Pig 15mm mortar with crew.
Posted by Dur Ecu at 2:05 PM No comments: 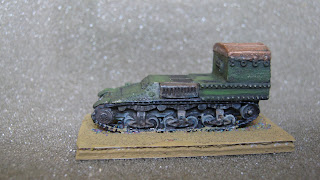 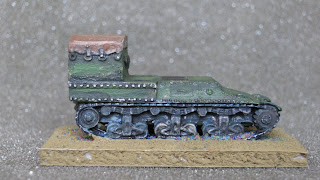 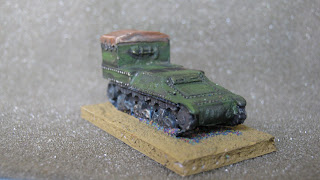 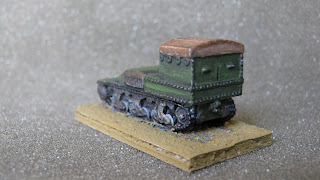 In FoF the carrier would be a Class 1 vehicle (1D6), the lowest class of armored vehicle, generally including light APCs or armored cars.
The photos show the finished model
Posted by Dur Ecu at 1:53 PM No comments: 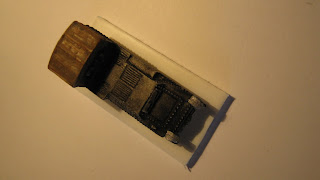 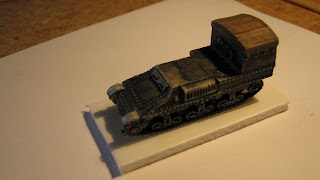 Above: The Lorraine Carrier on my work table. Only the tarp has been painted at this point. To give an idea of the size, the base is 1" x 2".
This is a Battlefront (Crusader) mini. It came in three pieces -- a cast resin hull and two metal tracks with running gear. It is 15mm (1:100 scale), according to the box description. Most French material in 1939-40 was painted “Army green,” and there are many examples on the web, with suggestions for mixing paints to achieve the dark olive green color. (Apparently, the exact color is not known.) Two-color camouflage schemes for armored vehicles that employed Army green and a chocolate brown color are also shown. There is a complete discussion of French paint schemes on the authoritative France 1940 page here http://france1940.free.fr/armee/colours.html

VBCP stands for Voiture blindée de chasseurs portés or, in my loose translation, “armored infantry carrier.” Two units that were completely equipped with the VBCP were the 5th BCP (Battaillon chausseurs portés) of the 1st DCR (Division cuirassée – armored division) and the 17th BCP of the 2d DCR.

Max. armor: 9mm (front, sides, rear); 6mm (top). Note: The passenger compartment had an open top that was covered by a tarp.

Armament: Unarmed, but a FM 24/29 LMG could be fitted to a side mount for AA fire.

Capacity: The tractor carried six men – two abreast in the narrow driver’s compartment and four in the box-like passenger compartment at rear. A boxy trailer seating six men could be towed.

The best source for the vehicle itself and its many variants is the comprehensive, highly-detailed article by Steve Zaloga titled “Lorraine 38L Infantry Tractor,” at the Military Modelling site online. See http://www.militarymodelling.com/news/article.asp?a=4082
Posted by Dur Ecu at 4:02 PM No comments: 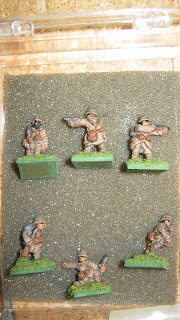 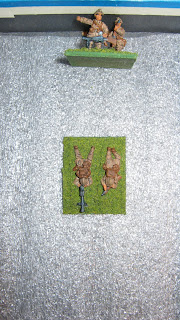 Top: Half-Squad Shock (Maneuver) Element
Bottom: Two Bases Showing Figures with the FM24/29 LMG
These are Peter Pig 15mm figures. I uploaded new images, since the previous images were indistinct.
Quality
Most line infantry in 1939-40 would be classed as Regular, Trained (D8). From my reading, the only troops with a higher rating (and I wouldn’t class any higher than Veteran – D10), would have been the Dragons portés (motorized infantry of the DLMs/DLCs), the Chasseurs portés (mechanized/motorized infantry of the heavy armored formations), Foreign Legion, Corps francs, and Chasseurs alpins.

I’d classify the French for the most part as Average (D8), although higher or lower values may be scenario appropriate.

This was for the most part Average.

Again, for the most part, Normally Supplied.
Posted by Dur Ecu at 4:26 PM No comments: 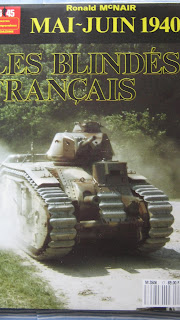 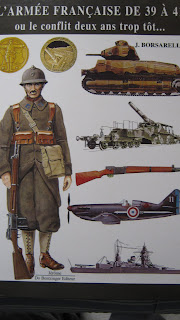 I listed Borsarello’s book yesterday as one of my sources. It’s comprehensive in its coverage of the three services – Army, Navy, and Air Force – despite its title, which might mislead a native English speaker and is well-illustrated.
McNair, Ronald. Les blindés français: mai-juin 1940. Bayeux: Éditions Heimdal, n.d.
McNair’s volume is really an issue of Heimdal’s Guerres contemporaines journal. Other than the cover, the numerous illustrations are in b/w. It’s a handy, authoritative guide to French armor – organization, material, and markings. Heimdal’s publications are worth checking out. One title that I haven’t seen intrigued me: Les trains blindés, 1826-1989. I had no idea that armored trains pre-dated the US Civil War!
Posted by Dur Ecu at 2:46 PM No comments:

A recent foray into Force on Force (FoF) rules (re)inspired me to find my 15mm Peter Pig and Battlefront minis for the France `40 campaign. Of course, I had to (re)familiarize myself with the arcana of French organization and armament from the period, so I thought I’d layout the groupe de combat (squad) as I understand it. This is the basic “type unit” for FoF.

So, there were 12 EM in the squad, which could cover a front of about 50 meters on the offensive. Generally, as I understand it, the squad would be divided in two for combat, as follows:

So, theoretically, you’ve got the typical base of fire and maneuver element of the interwar squad.