Above: View South Southeast toward the Lutheran Theological Seminary on Seminary Ridge. 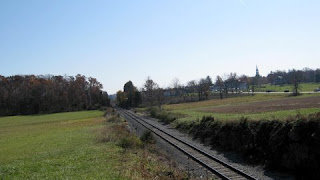 Above: View Southeast toward the town of Gettysburg (hidden by trees).

These views were taken from the same position under the bridge abutment as the previous view posted on Nov. 16, but the camera is now pointed southerly as opposed to northerly. In the upper view, the monuments of the 95th N.Y. Inf. and the 6th Wisc. Inf. may be seen on the right. The cut was shallower as it tailed off toward Gettysburg, and the Confederates were able to better utilize it as a protected firing position to rake the 6th Wisc. Inf. in its advance from the Chambersburg Pike (middle ground). 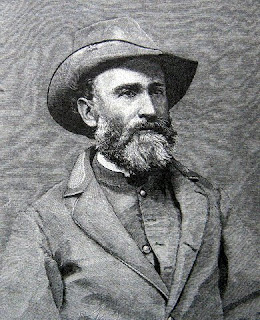 Straggling was a major problem in Civil War armies, and was particularly irksome to stern disciplinarians who drove their men to make some prodigious marches. Exchanges between such officers and their subordinates with respect to the “evil” were sometimes testy but humorous. One such instance was noted in a communication between General Early and Stonewall Jackson: “[General Early] who, when he received a note with Gen. Jackson’s compliments, & desiring to know why he saw so many stragglers in rear of Early’s division that day, answered with his own compliments that it was probably because Gen. Jackson rode in the rear of the division.”
Posted by Dur Ecu at 3:51 PM No comments: 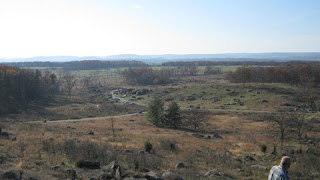 Another shot from our visit to Gettysburg last weekend. This is the view west across the Plum Run Valley (“Valley of Death”) from Little Round Top toward Houck’s Ridge (middle ground) and Devil’s Den. The wood line in the distance is Seminary Ridge, from which Longstreet’s Corps launched its attacks on July 2, 1863. 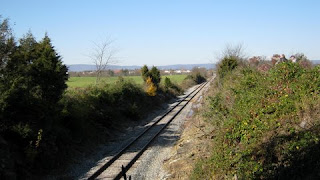 View northwest showing the famous railway cut (well, one of them) west of Gettysburg, which was the scene of heavy fighting between elements of Cutler's Union brigade and Davis' Confederate brigade on July 1, 1863. On the ground shown, the 2d and 42d Miss. of Davis opposed the 95th N.Y. and 14th Brooklyn of Cutler in an epic struggle that resulted in heavy casualties on both sides and the surrender of over 200 Confederates trapped in the cut.

I was at the park last weekend with friends. To get this photo, I climbed down the embankment of the cut underneath the park bridge for the roadway over it and onto its abutment. The cut here is through McPherson's Ridge and is relatively deep for about 200 yards of its length. The view is toward the mountains at the Cashtown Gap.
Posted by Dur Ecu at 9:16 PM No comments: 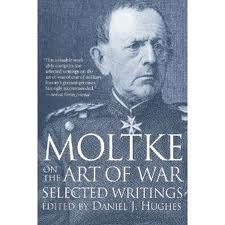 Above: Count Helmuth Karl Bernhard von Moltke depicted on the cover of Daniel J. Hughes (ed.), Moltke on the Art of War

Picking up this thread, here is the fourth set of ten. 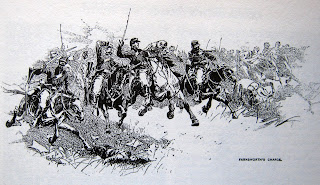 Above: Federal Gen. Elon J. Farnsworth was killed in action at Gettysburg, July 3, 1863.


I’ve been putting together a spreadsheet showing details of fatal battle casualties among general officers in the cavalry arm during the U.S. Civil War. According to data assembled by Russell K. Brown, there were 158 general officer combat-related fatalities in the war (78 Federal and 80 Confederate), the battlefields of which he aptly characterized as “the great killing grounds of American generals.”1

“Whoever saw a dead cavalryman?” was a popular calumny at the time of the war, and I was curious to examine the overall data on general officer combat deaths to discover the representation of cavalrymen among them. (I am doing this as well for field grade officers, but that is another, more ambitious, matter altogether.) Basically, I identify each general, their rank and unit, and the place, date, and circumstances of their death or fatal wounding.

I’ve only just begun this project, but it’s proving much more interesting (and challenging) than I imagined. 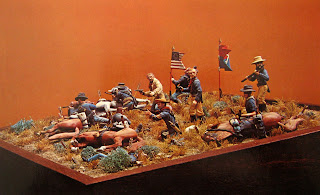 This diorama of Custer's Last Stand was produced by Bugle and Guidon, Inc., as a postcard to accompany its kit No. BG-18 in the mid-1970s. Constructed by Thomas E. Bookwalter, it depicts the final moments of Custer (hatless, staring at the viewer, and wearing the distictive cravat of his Civil War "Red Tie Boys") and his last companions, including his insuperably brave brother Tom (also hatless, in buckskin coat). The figures were 54mm.

Having previously mentioned Sears’ book on the battle, I thought I’d at least cite (above) a couple more readily available histories of the campaign and battle of Chancellorsville. Furgurson’s book is a well-written narrative history, similar to Sears’ volume. Bigelow’s work is of course the classic, voluminous analysis, subject to much criticism (not least from Sears and not surprising, given its age and ambitious scope) and may be found online. 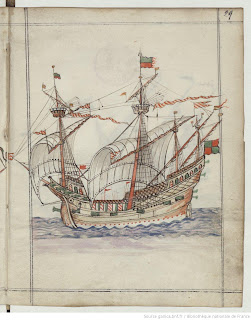 Representation of a small galleon


The galleon was a merchant vessel designed to combat corsairs on terms of equality. Some were quite large. The one depicted above appears to be relatively small, a type the Spanish called the galeóncillo. The description in Bancroft’s Hist. Central Amer., 1:189n, applies to the larger types:

“The galeon was a large armed merchant vessel with high bulwarks, three or four decks, with two or three masts, square-rigged, spreading courses and top-sails. One fleet of twelve galleons, from 1000 to 1200 tons burden, was named after the twelve apostles. Those which plied between Acapulco and Manila were from 1200 to 2000 tons burden.”

I had occasion recently to turn to Sears’ fine treatment of General Lee’s greatest victory to check some facts. Not having read the book, nor having the time to do so, a few things struck me about it nonetheless. First, Sears took the time to evaluate the various reports of casualties and produce I think the best statement and analysis of the casualties available. Second, his Appx. III, “Romances of Chancellorsville,” is a thorough examination of several of the fabrications, misrepresentations, and hoary myths that have encumbered the historiography of the battle. Not surprisingly, it begins with an assessment of “systematic” liar Gen. Alfred Pleasonton’s various statements and writings on the battle, the source of so much mischief over the years (and of course not limited to Chancellorsville). And, it continues with several other “romances,” including debunking the myth that Hooker was drunk and an entertaining look at the sources of Stephen Crane’s classic, The Red Badge of Courage.
Posted by Dur Ecu at 4:32 PM No comments: 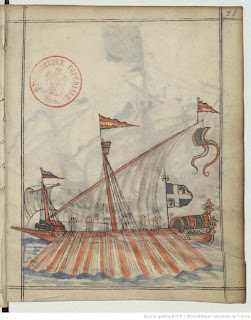 This magnificent depiction from a Breton pilot’s manual is interesting in that the vessel displays the flag of the dauphin, or heir-apparent to the throne of France. Possibly, this vessel belonged to François, 15th dauphin of France and duke François III of Brittany (d. 1536).

The galeaza was larger than a typical galley, but smaller than a galleon. Sharing characteristics of both types, she was equally at home on the inland (Mediterranean) sea and the high seas.
Posted by Dur Ecu at 11:06 PM No comments: