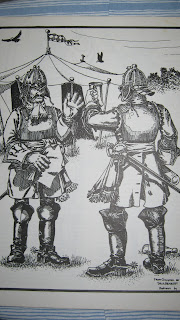 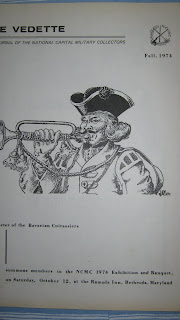 Here are a couple images from the fall 1974 issue of The Vedette: Journal of the National Capital Military Collectors. These depict a trumpeter of Bavarian horse, c. 1701 (cover illustration) and Bavarian cuirassier officers of the 1680s (top). The drawings were done by Jay S. Swingle, based on sketches by Dr. A. Benkert, to illustrate an article on "The Riders of the Blue King."
This was a quality journal with distinguished contributors.
Posted by Dur Ecu at 10:19 AM No comments:

Above: 10mm Conquistador Arquebusiers from Obelisk Miniatures http://www.obeliskminiatures.com/ These are suitable for the Italian Wars.

One of my projects this winter is to work-up scenarios for several battles of the Italian Wars and part of that is to return to the age-old question of the composition of the armies, particularly those of the Early Italian Wars and the campaigns in Naples.
An early, somewhat thorny problem is the ratio of espingarderos (hand-gunners and arquebusiers) to ballesteros (crossbowmen) in the Spanish expeditionary armies. Thorny because, while most of the time the Spanish tell us how many arquebusiers were part of a particular force, the crossbowmen were counted among the pikemen.

Working from several standard sources, I was able to determine the following ratios:

The ratio of firearms to crossbows in an Imperial force organized to fight the Hussites in 1431 was 1:1

The Emperor Maximilian eliminated the crossbow in the Imperial armies in 1507.

This data is quite interesting when compared to the ratio in Italy a few years later. In the space of a decade, the ratio is reversed. These were the first Spanish expeditionary armies organized on the new model.

American Artillery in the Mexican War 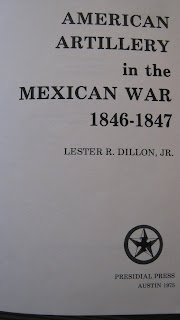 “American artillery dominated the battlefields of the Mexican War. In this conflict, America’s first foreign war, a new and elite corps of artillery was blooded in the crucible of battle, and a proven combat arm emerged with firm doctrine and the eminent esteem of both the nation and its military leadership.” – from the Preface

This excellent survey is, to my knowledge, the only work that deals specifically with the subject. It is rather on the small side but written in a spare, matter-of-fact style by a retired officer who well understood the subject in all of its metes and bounds.

It has just five chapters:

I. Prelude to Conflict
II. Cannon and Cannoneers
III. Taylor’s Army of Occupation
IV. The Heartland
V. Artillery and Victory

In addition, besides front matter, it has biographical sketches of many of the officers who later became prominent in the Civil War, a glossary, bibliography, and endnotes.

Having read it, I can now understand the source of the artillery genius of the great Civil War cannoneers like Henry J. Hunt and John Pelham (who of course was too young to fight in the Mexican War but was a worthy descendant of Ringgold, Duncan, Taylor, and Washington, who took the light batteries to war in 1846-47).
Posted by Dur Ecu at 4:55 PM No comments: