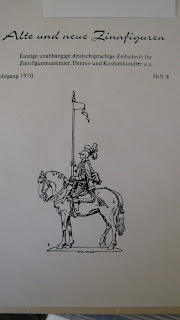 Above: Sketch of a lancer of Wallenstein’s Lifeguard (K. A. Wilke)

Imperialist generalissimo Albrecht von Wallenstein (1583-1634) was one of the most compelling, enigmatic figures thrown up by the Thirty Years’ War. A Czech, he rose from relative obscurity to command a large military establishment and amass a vast fortune. When he grew “overmighty,” he was removed from command, charged with high treason, and ultimately murdered by officers loyal to the emperor.

Like most general officers of the time, he had a lifeguard unit, although in his case it was actually an establishment of foot and mounted companies that was large by any standard.

I was reminded of this recently when fellow blogger Timur at De Rohan à Turenne (http://rohanturenne.blogspot.com/) posted watercolors of the lancer company of the mounted guard, and I remembered that I had a file containing a brief article on the lifeguard. Here is the reference:

According to this article, the mounted lifeguard originally (1625) consisted of two companies of mounted arquebusiers (Simonetti and von Haugwitz). Later, this was increased to four (late 1627), and then five (1628), although the fifth company (dragoons) probably belonged to Count Ottavio Piccolomini, the commander of the lifeguard and was his own lifeguard.

The five companies together numbered 500, indicating that each company was 100 strong. From late 1628, it appears that the four actual companies of the lifeguard were one each of lancers, arquebusiers, dragoons, and Croatians. They were described as having a “magnificent” appearance. A second arquebusier company was added subsequently, increasing the number of mounted companies, including Piccolomini’s, to six.

The number of companies, horse and foot, of the lifeguard was ten when Wallenstein was removed from command in September 1630. During the period of his second Generalitate, the lifeguard consisted only of two companies of arquebusiers.