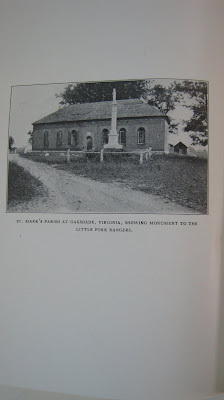 The ancient church, which was vandalized by Yankee cavalry during the war, is depicted in this photo from the book, showing the monument to the rangers dedicated May 25, 1904, which stands today.
I probably should have posted this earlier, to go with the Wiki reference, but I got distracted (not unusual for your correspondent).
Posted by Dur Ecu at 9:56 PM No comments: 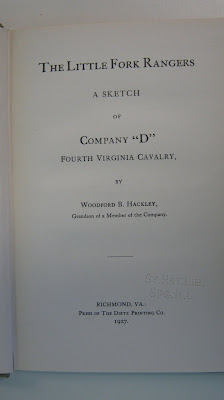 This interesting source differs from some others I’ve discussed here in that it includes not only original materials and reminiscences but also latter-day musings on the history of the unit. The author-compiler, grandson of a member of the unit, was acutely aware of the deficiencies under which he labored but made an attempt to gather as much useful material as he could at a late date when few of the survivors were alive. The result is something of a hodge-podge, but still it’s quite useful for the historian, since there’s much here that can’t be found elsewhere.

The Little Fork Rangers were organized in Culpeper County, Va., in April, 1861, before the state’s secession. They took their name from the area between the fork of the Hazel and Rappahannock rivers, north of Culpeper.

One of the places where the rangers drilled was Little Fork Church. Wiki here http://en.wikipedia.org/wiki/Little_Fork_Church
Posted by Dur Ecu at 6:32 PM No comments: 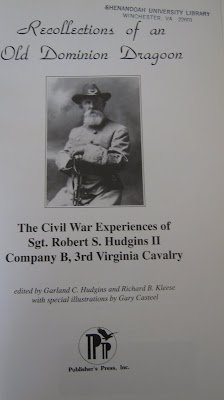 Sgt. Robert S. Hudgins II, was a member of the Old Dominion Dragoons (later Co. B, 3d Va. Cav.). He served throughout the war, from Big Bethel (practically his backyard) to Appomattox, and his recollections, despite lacunae, are compelling and shed light on many events but little described from the standpoint of a ranker. For example, he witnessed the duel between the Monitor and the CSS Virginia. He was present during the Seven Days, at Kelly’s Ford, during the Chancellorsville campaign, at Brandy Station, Gettysburg, and Yellow Tavern – where he witnessed Stuart’s mortal wounding – at the burning of Richmond, and at Appomattox.

An interesting part of the book, to my mind, is his relation of the war’s aftermath and Reconstruction. Utterly destitute, he made his way home and reestablished his family’s plantation under the most remarkably adverse (and in one instance, sinister) circumstances.

This is yet another slim volume of wartime reminiscences that the average reader will probably finish relatively quickly. Since it was published years ago by a small press, your best bet of obtaining it may be through interlibrary loan.

According to Gettysburg National Military Park, the Blakely gun that used to be in the old Cyclorama building is on loan to the Dakota Sunset Museum in Gettysburg, South Dakota. Thanks to Katie Lawhon of GNMP for the information.
Posted by Dur Ecu at 12:10 PM No comments: