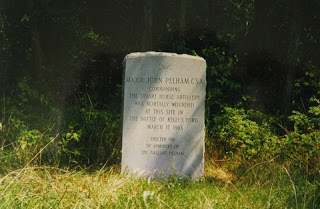 Above: Marker at the site of Pelham's mortal wounding near Kelly's Ford, Va.

Maj. John Pelham's name was practically synonymous with the battalion of the Stuart Horse Artillery, Cavalry Division, Army of Northern Virginia, where he had won a reputation for fighting his guns well to the front, often in the very face of the enemy.

In reporting his death in the cavalry combat at Kelly's Ford (March 17, 1863), Maj. Gen. J. E. B. Stuart stated, “The noble, the chivalric, the gallant Pelham is no more….His loss to the country is irreparable.”
Posted by Dur Ecu at 9:21 PM No comments:

A French dragoon, 1650-1678, from the Vinkhuijzen Collection of Military Uniforms, NYPL, otherwise unidentified. Note the “bonnet de grenadier” with the characteristic hanging bag. Generally, the common civilian-style hat was worn, but when the dragoon was “under arms,” on foot or on horse (which I take to mean on active service in the field), the bonnet was worn. Among the dragoons, the hanging bag often extended to the middle of the shoulders. This would provide protection from sword blows in close combat.

The origin of dragoons and, indeed, the derivation of the term itself are obscure. Some French military historians, notably Susane and Père Daniel, have discerned their origin in the mounted infantry employed by Maréchal Brissac in the occupa­tion of Piedmont (1550‑1560), but others, principally Choppin, have correctly expressed disagreement with this view. Brissac's “dragoons” (the term postdates the mid‑16th Century) were most certainly infantry pure and simple who were given horses captured from the enemy to increase their mobility and who were employed chiefly in raids and ambushes. They appear to be dragoons in the context of Turner’s definition, but they were not organized or trained as such, and their existence as quondam dragoons was ephemeral, due entirely to their commander’s adaptive genius. Indeed, mounting infantry to increase mobility was not uncommon during the Italian Wars, and the Venetians, Spanish, and Imperials had all piggy-backed infantry on the crupper behind light cavalry during 1509-1516.

The first true French dragoons emerged at the beginning of French military involvement in the Thirty Years’ War (1635). (However, the ephemeral “Griffons” of the Gardes françaises predated this apparition.)

These units originated in the reorganization of 1635, when, as we have seen, the French cavalry was first organized on a regimental basis. Choppin indicates that at this time the carabins were dispersed, and three of the 12 new regiments formed were dragoons. These included one regiment of mousquetaires à cheval and two regiments of fusiliers à cheval. Choppin states that these units were dragoons in all but name.

Ambert states that there were no dragoons in the French army in the decade following the Siege of La Rochelle, but that in the reorganization of 1635 a 1,200-man unit, the dragoons of Cardinal Richelieu, was formed.

On May 27,1635, just one day after the publication of the royal ordinance reorganizing the cavalry, the Marquis d’Alègre received a commission to raise a regiment of dragoons which was to consist of five 100‑man companies. This regiment was in existence until July 30, 1636.

Thereafter, for about a decade, the history of the French dragoons becomes somewhat murky. One regiment of the fusiliers à cheval was most certainly at Rocroi (1643), but the fusiliers do not appear to have survived the war. A new regiment of dragoons, that of the marquis de la Ferté‑Senneterre, was raised in 1645 and served at the Sieges of Mardyck and Quesnoy (1646) and at the Battle of Lens (1648). It would appear that at the Peace of Westphalia and until l656 this regiment was the only unit of dragoons in the French army.

In 1656, a second regiment of dragoons, designated the Dragons étrangers du Roi and commanded by a certain Count Oddi, was raised. This unit passed to the Duc de Lauzun in 1658 and performed distinguished service at the Battle of the Dunes (1659). Thus, at the conclusion of the French‑Spanish War in 1659, there were just two dragoon regiments in the French army.

In 1660 the companies of La Ferté‑Senneterre were amalga­mated with those of the Dragons étrangers du Roi, and the designation “étrangers” was dropped by the latter. Then, in 1668, the Dragons du Roi was divided, and two new regiments were created from it. These were Colonel général and Royal dragons, which ranked first and third, respectively, among the famous quatorze vieux (“old fourteen”) of the French dragoon regiments created between 1668 and 1676.
Posted by Dur Ecu at 1:54 PM No comments:

The 4th New York Battery of Gen. Joseph (“Fighting Joe”) Hooker’s Division, III Corps, had fought well enough at the Battle of Williamsburg (May 5, 1862) under its commander, Capt. James E. Smith. Subsequently, Smith moved on, and the battery was left in the hands of 1st Lt. Joseph E. Nairn. It performed abysmally in the engagement of Malvern Cliff (June 30) on the eve of the Battle of Malvern Hill. 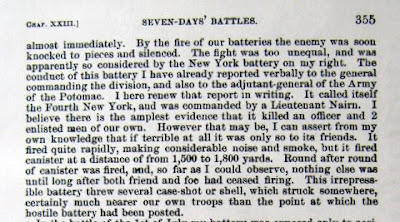 Its contribution to the fight was also reported by Capt. Thomas W. Walker, commanding the 3d U.S. Infantry, who noted the names of his men killed by the fire of the battery. 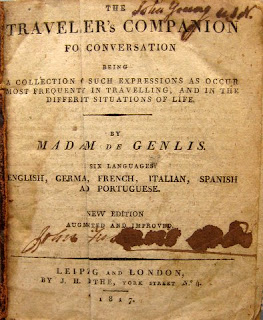 Genlis, [Stéphanie Félicité] Mme. de. The traveller's companion for conversation: being a collection of such expressions as occur most frequently in travelling and in the different situations of life; in six languages: English, German, French, Italian, Spanish, and Russian. Leipzig and London: J. H. Bothe, 1817.

The book’s title says it all. This pocket book is what is generally known as a phrase book or polyglot dictionary, and a Napoleonic era traveler would find it handy for making himself understood in a range of circumstances, from the everyday to the uncommon -- even sinister or threatening. I’ve reproduced a few pages here to give a sense of how one might communicate in certain rencontres following a battle. 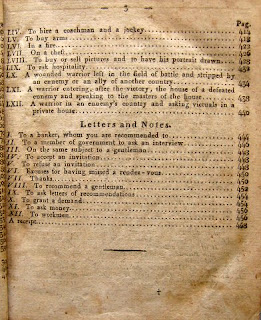 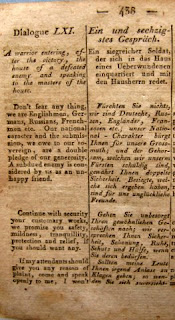 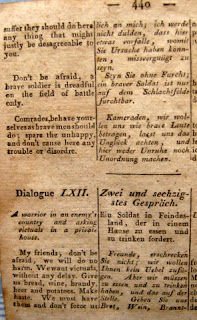 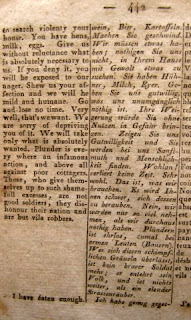