Below: Machiavelli (right) in conversation with Cesare Borgia 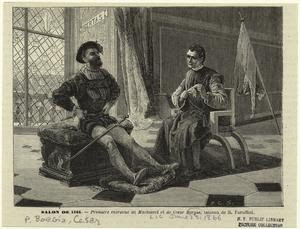 According to Macchiavelli there were three examples of swordsmen defeating Swiss pikemen during the Renaissance period. These were:

(1) The condottiere Francesco Carmagnola's victory over the Swiss Confederates at Arbedo (1422);

(2) A victory of the Spanish in Naples over the Swiss infantry of Aubigny (presumably Seminara II in 1503);

and (3) the success of the Spanish infantry against the "Swiss" at Ravenna (1512), a battle nonetheless lost by the Spanish.

With the exception of Arbedo, which Machiavelli rather obviously misinterpreted, these examples have been adopted by modern historians as indicative of the ascendancy of the swordsman over the pikeman.

For example, Oman, whose work on the period remains more or less the standard survey, states that "when the pikemen and swordsmen first met in 1502, under the walls of Barletta, the old problem of Pydna and Cynosephalae was once more worked out. . . . Then, as in an earlier age, the wielders of the shorter weapon prevailed" (Middle Ages, 2:275). In a subsequent work Oman avoided mention of the Barletta example but gives the Spanish swordsmen credit for their work at Ravenna (Sixteenth Century, 56). Gush, basing his comments on either Machiavelli or Oman or both, mentions the success of Spanish swordsmen over pikemen at Barletta and Ravenna (Renaissance Armies, 10).