Queen of the Confederacy

"Submissiveness is not my role, but certain platitudes on certain occasions are among the innocent deceits of the sex." So spoke Lucy Petaway Holcombe Pickens (1832-1899). As you can see, she is the subject of a book by Elizabeth Wittenmyer Lewis titled Queen of the Confederacy (Denton, Tex.: University of North Texas Press, 2002).
I haven't seen the book, but the subject sounds interesting. She married Francis Wilkinson Pickens before the Civil War and accompanied him to the court of Tsar Alexander II, where he served as ambassador. Mary Chesnut described her as "young, lovely, clever -- and old Pick's third wife." Her husband was a Unionist who was South Carolina's secessionist governor. Go figure. The Holcombe Legion was named for her, and she was the only woman to appear on Confederate currency.
Posted by Dur Ecu at 4:27 PM No comments:

An Englishman with Mosby's Partisan Raiders 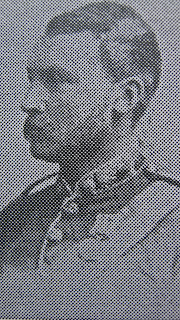 Capt. Bradford S. Hoskins, 44th Foot
(image courtesy of Bob Daly, via Stuart-Mosby Hist. Soc.)
Captain Hoskins was an English adventurer who was a veteran of the Crimean War and Garibaldi's Sicilian campaign. He enlisted with John S. Mosby's band of Confederate partisans and took part in the fight at Miskel's Farm in Loudoun County, Va. (Apr. 1, 1863), and the attack on a military train near Catlett's Station, Va., on May 30, 1863. In the Federal pursuit after this attack, Mosby's men were cornered at Grapewood Farm, near Greenwich, Va. After a sharp fight, they were defeated. Hoskins was mortally wounded in the fight and captured. He and Ranger Sam Chapman were cared for by a wealthy Englishman, Charles Green, whose home was in Greenwich. Hoskins died while under Green's care and is buried in the churchyard at Greenwich.
﻿
Posted by Dur Ecu at 4:39 PM No comments: 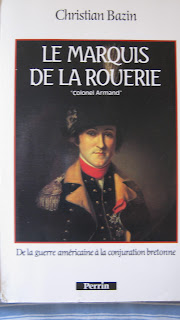 Armand-Charles Tuffin, marquis de La Rouerie (1750-1793)
I haven't posted much recently, since I've been busy with my book, but I thought I'd mention this book, which I picked-up yesterday as a kind of divertissement (or busman's holiday) from my daily research. Armand has always interested me, although confessedly I knew little about him (by contrast to Lafayette, his comrade-in-arms, or even Lauzun). And, what I did know of him seems unfortunately to have been colored by some of the calumnies heaped on him by, among others, his rival Harry Lee in the wake of the American disaster at the Battle of Camden, S.C. (1780). What I've found after a brief scan of the book is the portrait of a gifted partisan leader who had the entire confidence of Washington and the respect of his enemies, including Tarleton. In the painting by Charles Willson Peale that graces the cover of the book, Armand is shown in the uniform of his famous unit, Armand's Legion: blue coat with buff facings, blue waiscoat, and "Tarleton" helmet.
﻿
Posted by Dur Ecu at 2:43 PM No comments: 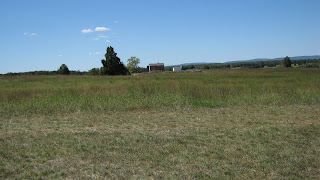 On the Confederate Line at First Manassas
This photo was taken from the Confederate line, looking west across the plateau of Henry Hill toward the Henry House. The house itself marks the position of the Federal line.
Posted by Dur Ecu at 5:55 PM No comments: 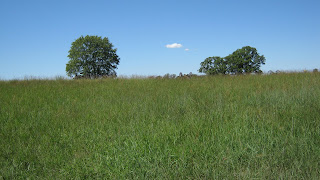 Behind the Gun Line on Henry Hill
This area would have been crowded with caissons, limbers, and teams belonging to the artillery on the crest (just visible if you look closely). Infantry supports for the guns would be deployed here also.
Posted by Dur Ecu at 5:40 PM No comments: 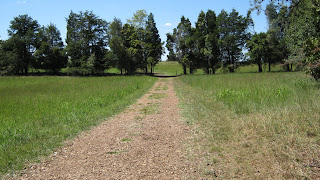 Line of Trees Just East of the Confederate Line on Henry Hill
Posted by Dur Ecu at 5:31 PM No comments: 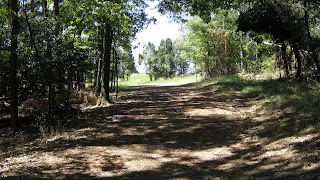 The Road is Less Steep and Less a "Sunken Road"
Closing on the eastern side of the Henry House plateau, the road is less steep. On the day of battle in 1861, it would no doubt have been crowded with soldiers going forward and wounded comng back. The shade was welcome as the heat, mixed with the smoke and dust, was oppressive.
Posted by Dur Ecu at 5:23 PM No comments: 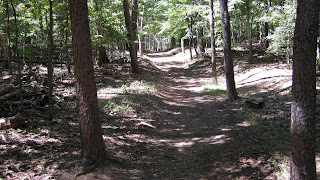 Farm Road Ascending from the Valley of Holkum Branch
Yesterday I was at Manassas National Battlefield Park doing a terrain study for the cavalry battle on the Federal left and rear at Second Manassas. To get to that site from the Visitor Center, you have to hike from the Confederate line on Henry Hill (first battle) approximately southeast and then south to the site of Portici -- the manse that was Gen. Joseph E. Johnston's headquarters during the first battle and from which he directed reinforcements toward the fighting on Henry Hill. On the way back from Portici, I took a set of photographs to show the route followed by the Confederate reinforcements as it looks today. Actually, it's not much different from how it looked then (July 21, 1861). The old dirt farm road ascending toward the plateau where Jackson stood "like a stone wall" cannot be much changed.
Posted by Dur Ecu at 5:08 PM No comments: